Batman in his Batmobile with the Joker Costume 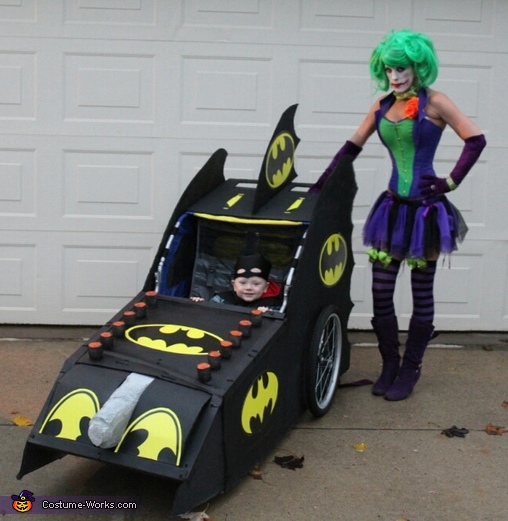 Batman and his Batmobile with the Joker

A word from Chelsi, the 'Batman in his Batmobile with the Joker' costume creator:

My son is 23 months old and is wearing a Batman costume but what makes his so unique is his Batmobile! I used a stroller that attaches to the back of a bike and used cardboard to make the actual batmobile around it and painted it black! I added foam pieces for the 12 cylinders and painted the top orange like the fire coming out. I used the Batman logo all around the Batmobile and also added the auger in the front, just like the batmobile has, which was also cut from Styrofoam! The batmobile didn't cost us anything but the spray paint, because we had to get some extra, but his batman costume only cost around $20. Every kid we passed wanted his Batmobile no mater what age they were! And of course you can't have Batman without the Joker. So, I decided to dress up as the Joker and painted my face, wore an old wig, and went to different cheaper stores to find pieces that would work for a joker outfit as a Female! My inspiration came from my mom bringing home the batman costume and I like to do costumes where my son and I can use a theme, since his father isn't involved, I try to make things as fun for him as I can without spending a lot of money and making things myself!