Barbara and Adam Maitland
by Christopher

The Maitlands from Beetlejuice
by Taryn 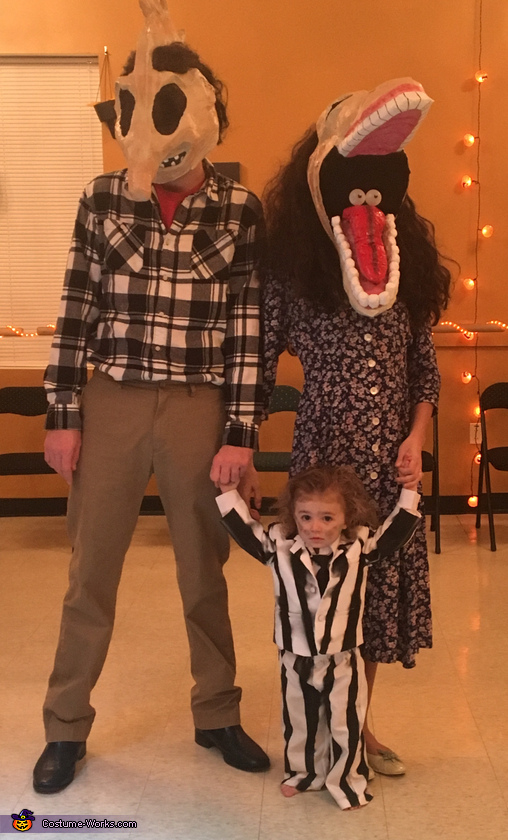 The Maitlands and Beetlejuice

A word from Danielle, the 'Barbara and Adam Maitland with Beetlejuice' costume creator:

I am wearing Barbara Maitland and my fiancé is wearing Adam Maitland. It's one of our favorite movies so we thought it would be perfect and fun to make. For mine I used a hat with hangers bent and tapped to it. Then wrapped in paper plates and duct tape. Then added plastic bags and more tape for filling. I papier mache'd the entire piece, then added more bags, mache, and spray paint. Then I made the tongue out of a sock, stappled it, added papier mache and paint. I made the teeth out of paper towels, papier mache and paint. I added makeup to it for contrast and painted the eyes on top, gums and mouth. Finally I got glued in the teeth and an old wig.
For Adam he made the base out of paper plates and tape. Added in a paper towel roll for the nose and also papier mache'd the entire piece. Added more mache for the stretch lines, followed by spray paint and makeup. He used nylons for the eye holes and hot glued them in and painted a mouth with teeth. Finally hot glued hair to it cut from my wig.
Our almost 2 year old made the perfect beetlejuice to add to our couple costume, making it a family costume. We ordered a white suit and spray painted black strips on using tape.
We already had most of the ingredients that we used. We spent about $50 total on all 3 costumes. ($25 of it being the suit).