Ballerina in a Jewelry Box Costume 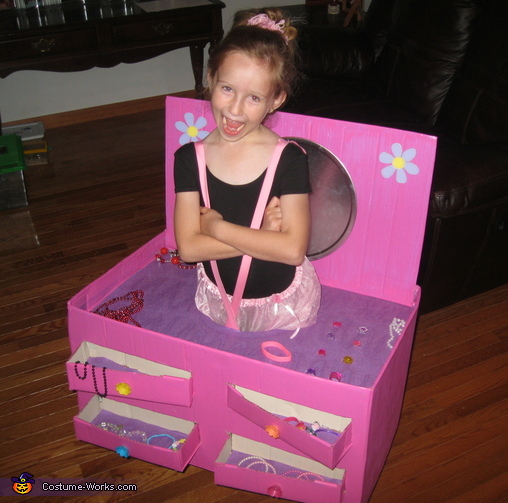 Ballerina in a jewelry box

A word from Amy, the 'Ballerina in a Jewelry Box' costume creator:

My daughter is wearing the costume. I make my children's costumes every year and I try to use a theme that is significant to them that year. My daughter LOVES dressing up, jewelry and dancing, so I combined the them with this costume.Items used in this costume are furniture box, gorilla tape, felt, paint and gorilla glue. Total spent was around $10 and total time spent was roughly 15 hours. First I measured my daughter and but out the frame according to her size. I cut a long length of cardboard, scored it when I wanted it to bend and then taped the edges with gorilla tape. I then cut another piece of cardboard and placed it inside the box a few inches down to look like the inside of a jewelry box.The secure this piece, I cut L shaped pieces of cardboard and taped them underneath the shelf. To make the drawers I cut the cardboard and folded it to make the front and sides of the drawer and cut another piece and used L shaped pieces to attach the back of the drawer. When cutting the piece for the back of the drawer, I used different widths from one end to the other to make it look like the drawer was open at different lengths. To secure the drawers, I cut a slit on the back side of the drawers from one end to the other and also cut out the cardboard when the drawer would go. Then I cut out a strip of cardboard the width of the drawer and long enough to extend from top of the first drawer to the bottom of the second drawer below it. I then inserted the back of the drawers into the opening just enough to slide the cardboard strip into the slit in the drawer and extended it to the next drawer and taped it with gorilla tape. Next I painted the jewelry box and placed felt in the drawers and top of the jewelry box. I used my daughter's play flowers for the knobs and cut out the flowers from an old plastic basket. I used liquid nails to adhere the pizza pan, which I used as a mirror, to the back of the jewelry box. I then placed her costume jewelry inside for a more real look. Also she dressed as a ballerina.