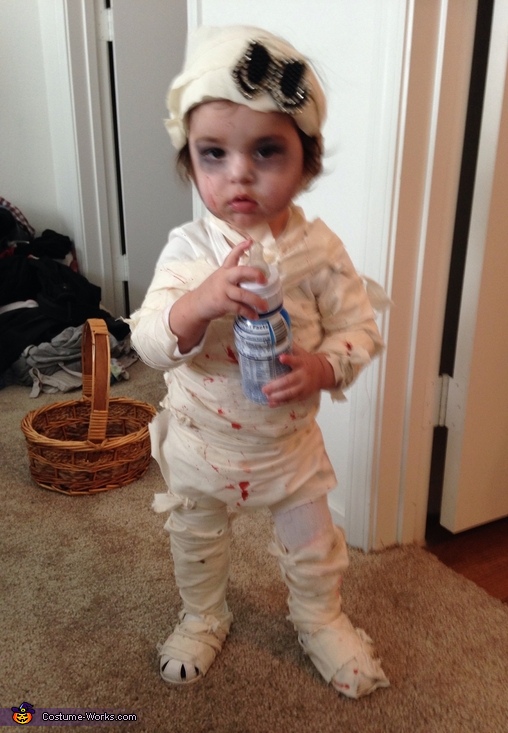 A word from Giselle, the 'Baby Mummy' costume creator:

Growing up my mama didn't have money to buy us all costumes (it was a house of 5 children) so she made them herself. One year I recall her making my older sister into a mummy using toilet paper, the image of my sister unraveling while we trick or treated stayed in my head- it's been 20years. So my daughters first Halloween out, this year, I wanted to recreate that costume but with more durability and extra creativity. My daughters name is Xyla she just turned one and was a total sport while I transformed her.
Items needed about 3 yards of cotton muslin, scissors, some ready to stick Velcro (has adhesive on one side), fake blood and a hair accessory appliqués I accent the head band.
Underneath the mummy creation Xyla was dressed in long sleeved white shirt and white tights with white shoes, mainly for warmth. I cut incisions about every two to three inches on 1 1/2 yards of muslin (along one side of the width) until no room was left. Tore the incisions from end to end. Tied about three pieces of muslin together and started wrapping them around each leg, I kept tying pieces of muslin as I wrapped and it ran out. I cut about two inches of Velcro and placed underneath any shifting pieces and to hold layers together. Stopped at the legs, Xyla wears a diaper so I had to leave her bottoms unwrapped. I took a diaper placed it on the remaining muslin and cut around it. This piece I used to cover her bottoms, used two pieces of Velcro, about 6 inches long to help stick it to her tights (made easy access for changing diaper). Wrapped her arms the same as her legs, just stopped at her shoulders. For the top shirt area, I tied 3pieces of muslin together and tied it around waist adding muslim as I wrapped, when near the chest area I criss crossed over the shoulders and keep wrapping and adding muslin strips as needed. Once fully covered in muslin, I took the remaining pieces and tied them together, wrapped them around Xyla's head, like a head band and added the bow. I put a generous sized amount of fake from to my finger tips and flicked it onto the costume to add the "splattered blood"; painted Xyla's face with white face paint fake blood and used black eye shadow alone the her eyes. Boom Baby Mummy. She's not cute, she's scary. ;)