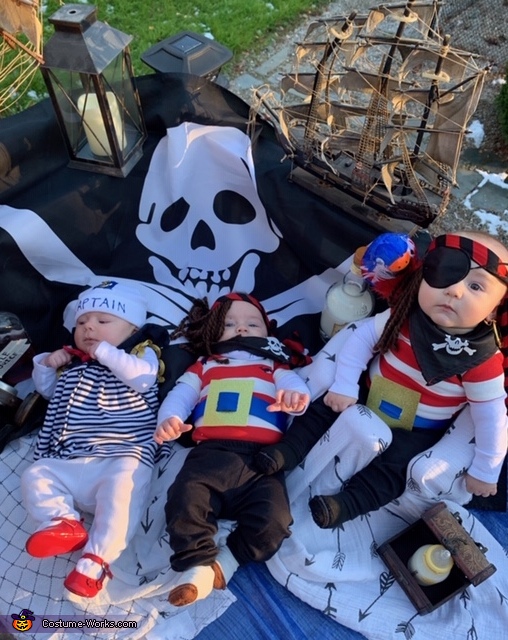 Baby Pirates and their Captain

A word from Joyce, the 'Baby Pirates' costume creator:

The solo picture is my grandson Greyson, age 4 1/2 months old. Along with his twin, Henry and granddaughter Abby (age 2 1/2 months) they are a couple of adorable pirates and she's the ship's Captain. My son has a pirate-theme collection, so the costume idea was easy. The pirates are wearing red and white striped onesies, both purchased on clearance for $5, along with black pants. I added yarn 'dreadlocks' to the pirate headband by hot gluing the strands and folding the headband in half to secure them. I modified the skull and crossbones bandanas by cutting and sewing them onto ready-made baby bandana bibs. With the snaps already in place, they were comfortable. The eye patch and clip on earring came from a costume set. Greyson turned out to be the BEST model and didn't mind them at all! The parrot was a great added find, courtesy of Walmart. The pirate ship and other items from the collection formed a nice backdrop. In total, the 2 pirate costumes cost approximately $30 (with the onesies and pants still able to be used for everyday wear). My little Captain was in a sailor dress with some gold epaulettes sewn on, red shoes, and a glitter-glued cap with an anchor accessory. The materials for the cap were under $10. Photo shooting 3 young infants on a VERY cold day was challenging! They were remarkably patient and will have some good memories from their first Halloween.