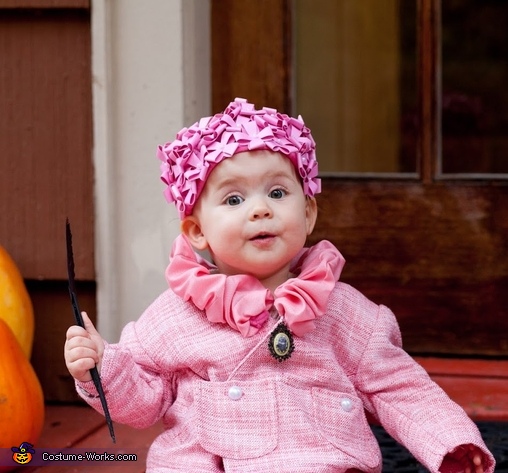 Dolores Umbridge with her Black Quill

A word from Lindsay, the 'Baby Dolores Umbridge' costume creator:

My 1-year-old daughter is dressed as the awful Dolores Umbridge from Harry Potter. Her sweet self couldn’t be further from her character! To make the costume, I bought a woman’s pink tweed suit jacket at a thrift store for $2 which I cut up and fashioned into a baby-sized skirt-suit set. I used a seam-ripper to carefully remove the pockets and buttons to repositon them. I found the broach in a clearance bin at Joann fabrics and then modpodged a picture of a cat on top. I cut-out the jacket liner to make the fluffy embellishment around the collar. For her hat, I cut out tiny little stars from a few sheets of pink cardstock, hot-glued them into their shape, added a plastic pearl in the center (also from Joanns, less than $2 for a bag of 50+). I then hot-glued these onto a pink fleece beanie that I made from a pinterest tutorial with a 1/3 yd fabric (I had MUCH) leftover. I made her Black Quill by hot-gluing a craft feather onto an old paintbrush and painting it with black acryllic paint. Voila! You have a mini notorius Dolores Umbridge. 🖤