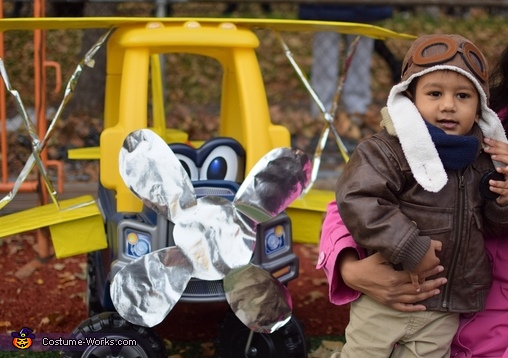 A word from Divya, the 'Aviator Baby' costume creator:

With his ride on truck lying around the house, wanted to put it to good use and started brainstorming ideas like carriage, police car.
But plane sounded the coolest even though it meant some more work with intial designing, prototyping for robustness and finally constructing.


Items used:
1) Yellow thick gift wrapping paper
2) Velcro with sticky back
3) Silver metallic wrapping paper
4) Cardboard from package boxes (long one from one of his toys packaging for the top wing and other regular sized boxes)
5) Tansparent tape and glue for sticking wrapping paper to cardboard
6) Facial wipes box empty for structure support.

First let's look at some challenges and solutions that were implemented

Challenge 1: We needed a costume for the local Halloween parade which was near by but not close enough to walk.
Car trunk won't fit the plane in its entirety, so this needed to be easily assembled/ disassembled.

For parts to be easily removable/attachable I used stick on velcro. This was a life saviour! As it helped with the next challenge too!

Challenge 2: Structure should be sturdy enough to handle winds and toddler "inspections"!

With some extra tape in hand, I was confident the plane will take the inspections of toddlers.
But it was the velcro really that saved the day! (Took pounding and testing not just Vedant but other toddlers in the street as well!)

Challenge 3: The toy truck door should be blocked so that toddler can sit if they want.

This came in handy as Vedant sat inside most of the time during the parade. I simply designed with this in mind.
The plane wings are only as wide as the door so it fits exactly on the door and no more!

Now that we have taken down all the challenges, it down to some cutting, taping and velcroing.

1) Facial tissue boxes, wings, tail wings, propeller were covered with respective wrapping papers.
2) Silver metallic wrapping paper was rolled to form the connectors in the plane and taped on to the wings.
3) Velcro was put on all parts then crefully place in hte truck to mark where they go and the other part of velcro was stuck on the truck in the process.
4) Then I took off all the parts and kept in a place away from the little experimentalist! :-)
(or so I hoped, had to re-tape a few things but thankfully nothing really broke)
5) The day of, we just threw (not literally!) everything in the trunk of the car and on the site transformed the toy truck into a (real ;)) aviator plane in a minute!
Viola!! and all the "AWEsome!" "woooooooooooooooow!!", "uuuuuuuuuuuhhh", "aaaaahh"s, "its not a car, its a plane!" pour in from the kiddos and "haha, that's so cute!" "look at that one!" "very nice! I like it" from grown ups.
Not to forget all the kiddos wanting to "test out" the parts especially the "oh so shiny" propeller blades!


This costume won in the local parade but really its the reaction from kids that made the effort worthwhile.
I'm really proud of this! Hope you enjoyed reading about the procedure as much I enjoyed making it. Thanks for your contest, fingers crossed!