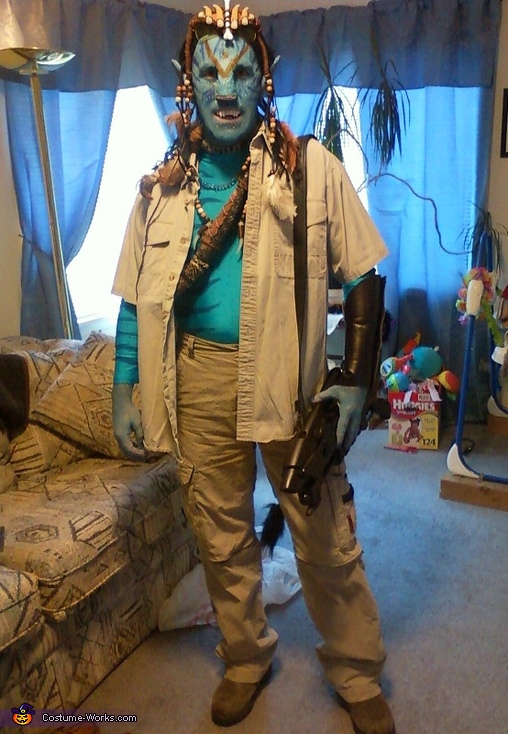 A word from Eddy, the 'Avatar - Jake Sully' costume creator:

I started collecting stuff for this costume about 2 months before Halloween to see if it would prove to be a good choice. After deciding to go with this I really liked the glasses they wore while flying the Mountain Banshees so made a pair out of a pair of yellow tinted sunglasses. I pulled out the lenses, wrapped leather laces around the frames, added bones, teeth and beads. Reattached the lenses and they worked great. I purchased an avatar wig, the spandex body suit, the dagger, ears, teeth, and forearm cover from a costume store. I modified the wig with some beads and feathers, and made a few necklaces as well. The clothes were purchased from the thrift store. I fastened a belt strap to the dagger to sling around my chest. The gun was made out of an old squirt gun. I then proceeded to paint myself blue. It was mostly blue makeup but I made the mistake of adding some paint to get the desired color and ended up having a blue tinge to my skin for a week. I created a latex rubber nose I laid over cotton and attached it to my face. Once again I was the talk of the office and everyone wanted pictures.