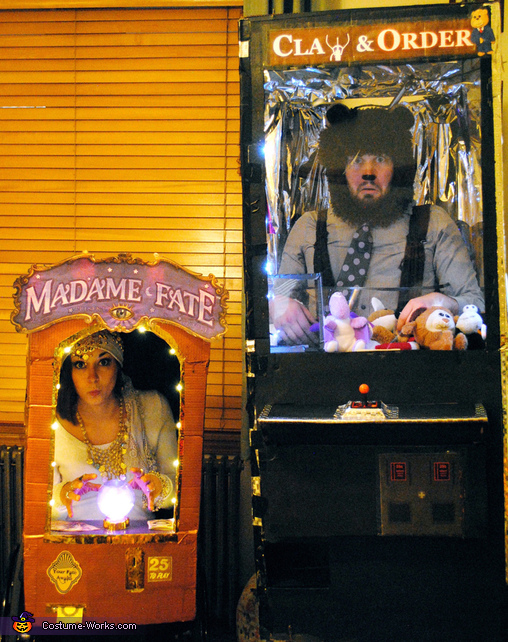 A word from Kasey, the 'Arcade Mania' costume creator:

"Madame Fate" is a tribute to one of our favorite games, and we came up with the idea to be a teddy bear wearing a suit inside a claw machine and call it "Claw & Order." We thought it would be a really fun theme this year, especially if we made them interactive. We had a constant line for hours of children and teenagers (and a few adults) who wanted to play the claw machine and/or get a fortune. Most of them thought it was a real working claw machine since he created a pulley system to raise and drop the claw. He let the kids "play" by asking which toy they were going for, guiding the claw to the toy, squeezing the claw and pulling the string to raise.

To make these, we used cardboard and lots and lots of duct tape! We each started with a big cardboard box and taped on more cardboard to get the correct shape, size and details. We sliced out the windows on 3 sides, spray painted, then began detailing. We printed out the game title signs, 25 cent signs, tarot cards, etc and glued them to the finished structures. We used dollar store gold and silver duct tape to line the edges of the boxes and windows and other small details. The claw machine windows were plexiglass attached by velcro. Instead of windows for the fortune teller, I took some old black sheer fabric and stitched it into the box for curtains in the 2 side windows. We each taped a strand of battery powered LED lights to the inside of the box around the front windows' edges to feel more like an arcade.

The crystal ball was incredibly cheap and easy to make. I pulled some spider web decoration as thin as possible, then carefully pushed it into a large, clear Christmas ball to create the illusion of smoke. I covered a large color-changing tea light with the gold tape and glued the web-filled ball on top. My fortune teller costume was simple: I wore one of my fancy scarfs on my head, a long lacy skirt, gold costume jewelry, a whole bunch of my own rings, and a gold headpiece found on Amazon. Fortune teller total cost approximately $20

The claw machine required a harness, which he made with fabric straps attached to a wooden support bar in the middle of the box. He made the claw by cutting up and duct taping a whisk, then attached it to string and created a pulley system so he could manually pull it up and down. The joystick was an old Atari joystick from my childhood. He covered a thin piece of wood with black fabric to set as the "bottom" of the game lined with more plexiglass where he placed a whole bunch of dollar store stuffed animals. A hand sewn bear head with a suit surrounded by stuffed animals and Claw & Order was complete! Total cost approximately $35