Animal from the Muppets
by Maria 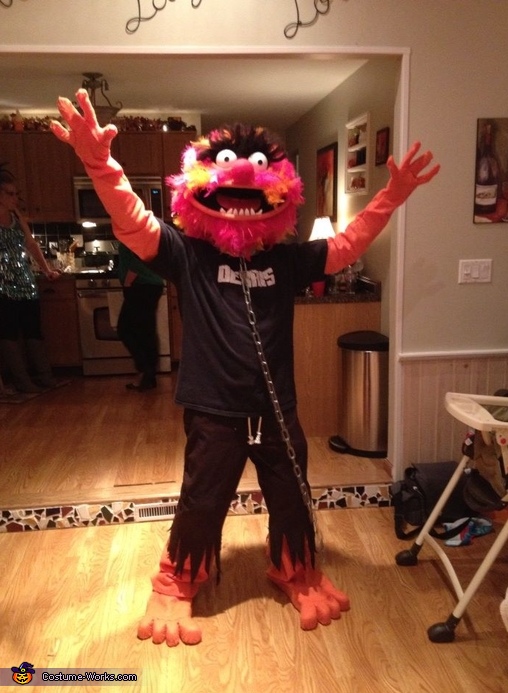 A word from Bryan, the 'Animal from Muppets' costume creator:

I'm a drummer. Animal was an early influence. And come one, he is awesome.

Fabrication: Two strips of PVC sheeting were formed around a paint can with the aid of a heat gun. Once shaped, they were trimmed up on the table saw, connected at one seam with a small door hinge, and joined in the front using rare earth magnets. For the look of rivets, I cut the heads off of 20 carriage bolts, drilled holes in the PVC for the stubs, and set them with epoxy. I made the spikes by shaping more PVC on an oscillating sander and attaching them with epoxy. Primer, metallic spray paint, and a few coats of spray lacquer finished it off.

The Head
Materials: Plastic Globe, felt, mesh fabric, ¾” PVC trim board, Styrofoam balls, feather boas, two fake moustaches, and hot glue.
Fabrication: I started with a plastic globe which you find on yard lamp posts. I enlarged the bottom hole for my head and cut out the mouth using a Dremel with a cutoff wheel. The inside of the mouth was formed with cardboard and set with hot glue. Next, the head was skinned in felt, which black and pink felt for the inside of the mouth and tongue respectively. Lips and the lower eyelid were made by wrapping tubular foam (caulk saver) in felt and then gluing it to the head. For the nose, I used a 3”Styrofoam ball skinned in red felt and attached with hot glue. The eyeballs are 2 ½” Styrofoam balls with a third cut off on the Bandsaw so they would look set into the head. For the top eyelid, I used black felt, and for the eyebrows, I used to fake mustaches. The teeth are made from more ¾” PVC trim board, which was shaped on the oscillating sander and set with more hot glue. The last step was the laborious task of gluing on chicken and turkey feathers, which were acquired by dissecting several feather boas. To keep the head from moving around on my own head, I used more of the salvaged foam and hot glue into I got a snug and comfortable fit. There is a section of black mesh fabric in the back of the mouth, which I’m able to see through.

The Body
Materials: Felt, snaps, a pair of pants, a T-shirt, length of rope, cardboard for templates, and hot glue.

Fabrication: I created a cardboard template for the body front and back, as well as a template for the arm/hand. Once the felt was cut out, I joined the parts with hot glue because it held better than my poor sewing skills. Snaps were glued on to keep the vest closed. A few snaps were used to hold the arms to the vest and prevent them from sliding down. Simple tubes with one seam were made for the legs and glued into the pants. The pants are a Goodwill purchase and are held up with a length of rope as a belt. The T-shirt is from my closet.

Fabrication: The feet were made from dense foam salvaged from a packing crate. They fit around my shoes and lengths of elastic were used to keep them from sliding off of the shoes. Each toe was skinned with felt individually to keep it as smooth as possible, and then the rest of the foot was covered with a larger piece of felt with one seem at the back of the foot.
Challenges: Skinning the head was a challenge and I had to make several seams to avoid bunching in the felt, which wasn't ideal, but I was able to hide them with the feathers. I had similar issues with the toes, but just went with it and did the best I could. I'm pretty proud of the head because everyone insists I bought it until I show them the build pictures. I'm also happy with the body considering it was all done with hot glue since my sewing machine is all out of whack.

Skill: I'm self taught and just design on the fly. This is my fourth costume and only my second full body costume. I have a full workshop in my basement where I do woodworking and drum making. Halloween is just a time for me to switch it up a bit and have some fun.