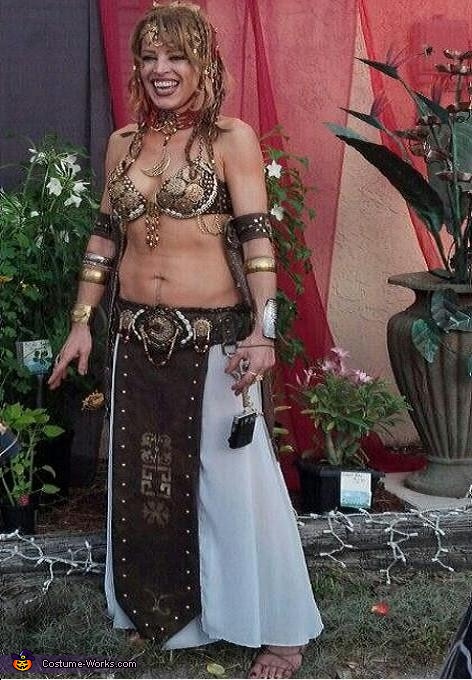 Description: This costume wasn't for Halloween, but for a recent show, but I'l be waring it for Halloween too! Last month I was asked to be in an event called Garden of the Goddesses. The event organizer informed me I would perform (fire dance- a hobby of mine) as "Inanna-Sumerian deity of love, war, and chaos" and that the show was in 2 weeks! I had no clue what to wear! So I began researching ancient Sumerian culture, fashion etc... as I wanted to be as historically accurate as possible (as far as materials were concerned). I learned that the ancient Sumerians (3000 BC) used leather, were skilled metal workers (bronze, copper, silver, gold) and that the popular stones and adornments were lapis, carnelian, shell, and chain. I also read that the Sumerian women were really into braiding for their hair. I then Googled some images of Xena Warrior Princess (and admittedly even some of Princess Leia LOL) for inspiration on how to style it. So I went to work. I built the belt base from scratch using pleather (animal-friendly leather) and then added medallions, carnelian and lapis beads, shell, and chain. The long front and back panels were also created from the pleather, then I studded the perimeter and stenciled designs down the center with gold paint. I covered a bra entirely with medallions, studs, shell, and chain and then added beading and stones. I made the matching arm gauntlets from the pleather and then studded them, with an old earring part on each to top them off. Most of the components of the costume were either from thrift stores or old jewelry, belts, purses I already had (including the metal crocodiles!), so I like to think of this as an eco-friendly costume...well, except for the spray paint. All of the metal parts of the costume were either silver (the studs and medallions) or all different shades of gold, so I had to spray paint everything (thank heavens for Rustoleum gold) to make it all match! I'd say I put about 50 hours into this costume, I frantically worked on it for 10 days about 5 hours a day. It took 2 hours the day of the show to braid my entire head. It was a great learning experience. I learned a lot of about ancient Sumerian culture, and that I can work pretty well under pressure. Thank you for allowing me to share the experience.