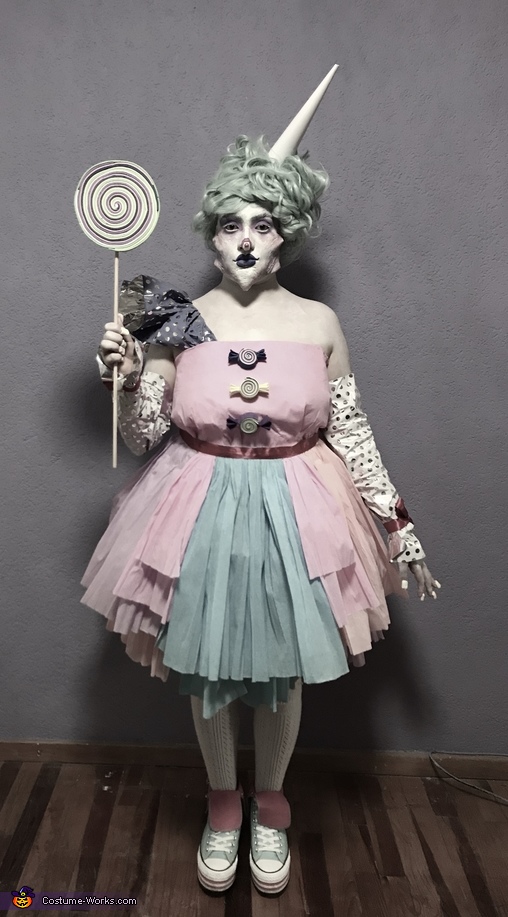 A word from Julieta, the 'Amelia the Candy Queen' costume creator:

This is a costume I did on myself based on an original character I created called « Amelia the Candy Queen ».
The idea just came to my mind randomly and I decided to bring it to life to the best of my abilities! The backstory of my character is that she is the queen of a fantastic candy land; however, beneath her bright façade hides an evil and manipulative tyrant who is all but kind. I wanted to create something very colourful that would normally be associated with cuteness, but add an uneasy feeling with shapes that felt out of place and cohesive at the same time in order to convey my character’s true nature.
I wanted a very angular makeup, and I got inspired by pierrots for the paint. I created the nose, chin, cheekbones, and jaw with home made scar wax (it’s just a mixture of vaseline and flour) and I was very pleased with the results! It’s very cost efficient for anyone who wants to experiment with sfx makeup; just don’t forget to use an adhesive, like spirit gum, because otherwise it will met right off your face!
For the hair I used a long mint wig and styled it into a messy updo, I added a white cone on the top so it would ressemble cotton candy on my head!
Finally, the costume was entirely homemade with the help of my talented mother! I wanted to stick with the candy theme and imagined that a candy creature’s clothes would be made out of paper and wrapping, so the entire dress is made out of crêpe and wrapping paper! I got inspired by the rococo style for the skirt layering and the « candy bows » on the bodice, but with a more modern approach. Since crêpe paper is very resistant, we were able to sew it as if it were fabric, and we used hot glue for the candy bows and the lollipop prop (which was made out of rolled up foam paper). The cost of the costume was approximately $15-$20, not considering the wig or makeup which I already owned; however, in the budget I am considering a hot glue gun since I didn’t own any, without it the budget would have been around $10 since it was just paper and vaseline!
My best advice to anyone is to just be creative and have fun with your costumes! You can make something great with a very small budget if you let your imagination run wild and if you are willing to get crafty :)