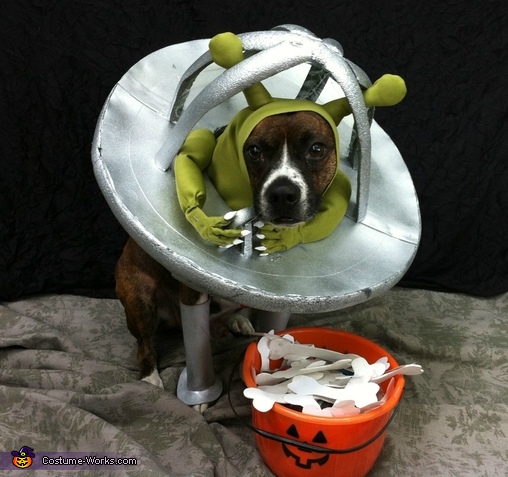 The truth is ou there!

A word from Tracey, the 'Alien flying his Ship' costume creator:

I want to share with you the product I have discovered that has changed my costume making abilities, is very inexpensive and is super lightweight. Plumbing Pipe insulation, I will call it foam! I discovered it years ago when looking for something lightweight to make a snake headpiece for my childs medusa costume. I cut it into strips and using hotglue am able to form any shape. I use low temperature hot glue because high temp will melt the foam and burn your fingers, as I have painfully discovered.
This is Miles dressed as an Alien flying his ship. To make the Alien ship I started by taking a strip of the foam and making a circle for the outer edge. I then made a smaller circle that fit comfortably over Miles's head. I then connected the two by using strips of the same length about two inches apart on the outer circle, all the way around. You will have to trim the pieces on the smaller end to fit. Once I had the basic top circle formed, I then created a circle for the bottom, that would sit on Miles's shoulders. I then used more strips and attached the top circle to the bottom forming an upside down dome. I covered the shape with craft foam which I also hot glued on. I then made the dome on top of the ship using two long strips and criss crossed them over each other. I made sure that they were tall enough so that Miles head would not touch the top. I then formed a steering wheel and glued it on. The whole thing was then spray painted in silver. You can't see them in the pictures but I glued on plastic bottle tops and painted them red for lights underneath the space ship. I formed the fingers and arms, again using the foam and covered them in green fabric, which was also glued with hot glue. I made the finger nails with craft foam and hot glued them on and then attatched them to the ship. To make the top dome look like it was glass, I used clear plastic from a book report cover. I left the front sections open where Mile's face would be.
Using the same green fabric, I made a green hood and added antenna's which I lightly stuffed to make them stand. I put the hood on Miles, then the ship over the hood. The whole thing barely weighs anything! I finished by cutting strips, added a base to them, and made them fit with an overlap around Mile's front legs using the over lap for velcro for ease of putting on and removal. They made the landing legs of the ship.

The whole thing cost me about $2.00 to make but I already had spray paint, hot glue and fabric scraps. The insulation was $0.99 for a 6ft piece which was more than enough, craft foam $1.00.