Alice in Wonderland
by Julie

Alice in Wonderland
by Mikaela

Alice and Wonderland
by Kim 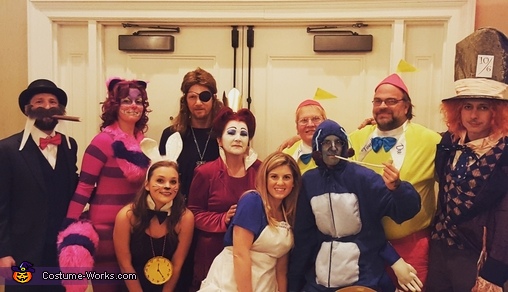 A word from Rachel, the 'Alice in Wonderland Group' costume creator:

We attended a storybook ball and needed a large group so Alice in Wonderland was our choice. For the Walrus he wore a suit, bought a fake mustache and used pipe cleaners and felt for the tusks, added a fake cigar, bowler hat and cane. The cheshire cat bought a pink leotard and tights, used purple fabric paint to make the lines, and bought fur to make the collar, tale and hands/feet.the white rabbit was a leotard with a tail attached, clock made of a paper plate, duck tape and beads. The knave of hearts bought all black, attatched some black hearts to the shirt and an eye patch. The queen of hearts found a skirt and top at good will then used ribbon and red material shaped like hearts to decorate, her crown was card board spray painted gold. The tweedle dee and tweedle dum bought yellow shirts and red pants and added the hats and bowties. Alice was a dress from goodwill that we added lace to and bought the apron at hobby lobby. The caterpillar was a sweat pant set we added felt to, got the arms and legs from the dollar store and colared them with a sharpie, sewed them on then attached fishing line between so all the arms would move, using pompoms and pipecleaners for the antena. The mad hatter purchased his costume at a party supply store.