Alice and the Caterpillar from Alice in Wonderland Costume 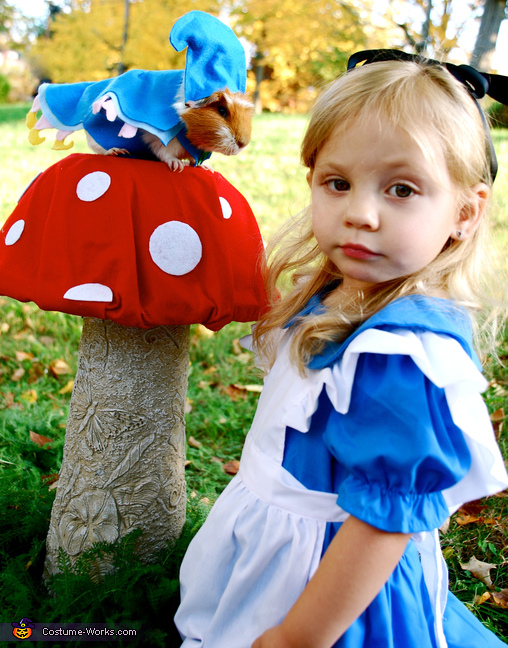 I Found Myself in Wonderland...

A word from Jennifer, the 'Alice and the Caterpillar from Alice in Wonderland' costume creator:

Alice and the Caterpillar from Alice in Wonderland

Alyvia and Sweetie the guinea pig are the best of friends! Alyvia really looks like Alice from wonderland, so I was inspired to make Sweetie a costume that fit her size and personality well! The caterpillar from the movie is very small and relaxed, just like Sweetie! The two of them were such a hit! Everyone said how adorable and simply precious they were together!

(Alice costume was bought online) To make a guinea pig sized caterpillar costume, I bought the colored felt, measured the guinea pig, cut the felt to size. Then I just trimmed down the edges and attached another piece of felt with velcro for the chin and belly strap. Then Added the arms/feet. To make the hat, I just cut the shape of the hat and glued it together. The mushroom prop I used red felt and covered a bowl. Then added the white spots!