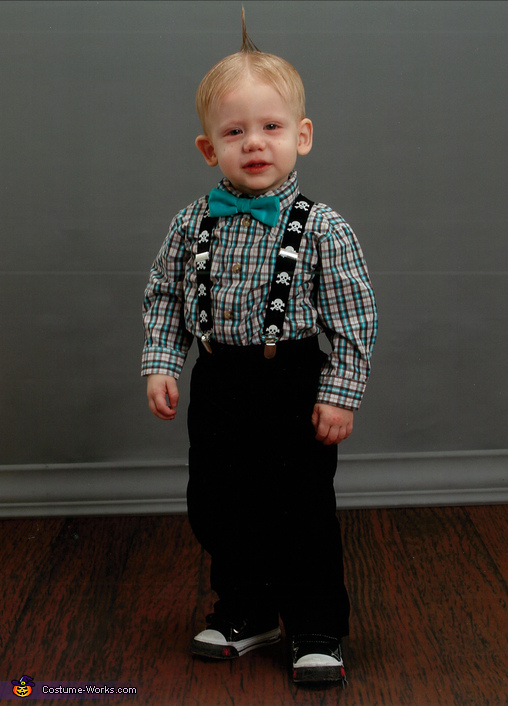 A word from Jessica, the 'Alfalfa' costume creator:

This is my son, Owen. The idea for this costume was literally last minute. I originally had a monkey costume I picked up for him, but it just didn't feel right to me, so I put on the good 'ol thinking cap. I wanted something recognizable and that he would actually keep on his body. I browsed Pinterest for toddler boy costumes and a lot of the DIY ideas were based on movie/tv characters, so that sort of led me in the direction of the idea of Alfalfa. I'm browsing these pictures, thinking of movies and what I could pull off in a few hours with what I had on hand and it just hit me. It was perfect.

Although this was a last minute thing, luckily I had everything I needed from his first birthday party. He had one dress shirt. ONE. Thankfully it matched his bow tie we had for him and the skull suspenders go perfect with anything on a toddler of course. I used an eyebrow pencil for his freckles and his hair, lets just say lots of hair gel, patience, and skill. :)

Everyone LOVED it. We were shopping at the grocery store earlier that day and had him dressed and I would hear whispers "oh my God, it's Alfalfa!" "That is the best Alfalfa I've ever seen" "He is SO cute!" It was our first year trick or treating and I really think everyone in our neighborhood will remember him the most. I really enjoyed the fact that everyone, young and old, could identify him as Alfalfa because of the original and remake of the movie.