Jasmine and Aladdin
by Oksana

Jasmine and Aladdin
by Alexandra

Aladdin and Jasmine on their Magic Carpet Costume 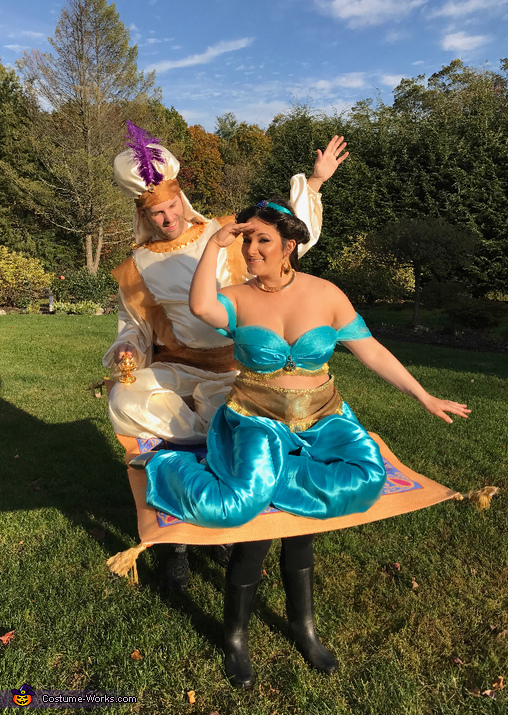 A word from Lindsey, the 'Aladdin and Jasmine on their Magic Carpet' costume creator:

My birthday is in late October, and I’ve been having costume birthday parties for as long as I can remember. This year, I asked my husband if we could put together a show-stopping costume and win the costume contest at the the big Halloween Ball at the Hawthorne Hotel in Salem, MA as my birthday gift. After a four-hour brainstorm session (in which my husband virtually insisted that the costume somehow involve fake legs), we came up with our idea: we would be Aladdin and Princess Jasmine, floating on the magic carpet.

We bought our tickets and started our costume in mid-August. I hand-sewed the costumes out of satin fabric, and attached lots of trim and jewels. Then, we started on the carpet. The base is made of two pieces of thin plywood with a hole in the middle (for us to stand in), connected by paracord. The plywood was suspended by more paracord from our waists so that it was suspended at hip-level. We laid an exact replica of the magic carpet (the only part of the costume that wasn’t homemade) over the plywood and cut two holes to line up with the holes in the wood.

The fake legs on the carpet, to give the illusion that we were floating, were made of metal ducts (the kind you might attach to your clothes dryer) bent and inserted into the costume pants. We sewed real shoes to the ends of the legs as a finishing touch. We even wired four tassels to the corners of the carpet so that they stuck straight out and made it look like it was really flying. Lastly, we donned black leggings and black shoes on our real legs to keep them hidden underneath.

We had an absolute blast at the party at the Hawthorne, and we ended up winning first place in the costume contest. When we won, the whole crowd of 600+ attendees sang “A Whole New World” with us. It was the perfect birthday – I got exactly what I wanted.