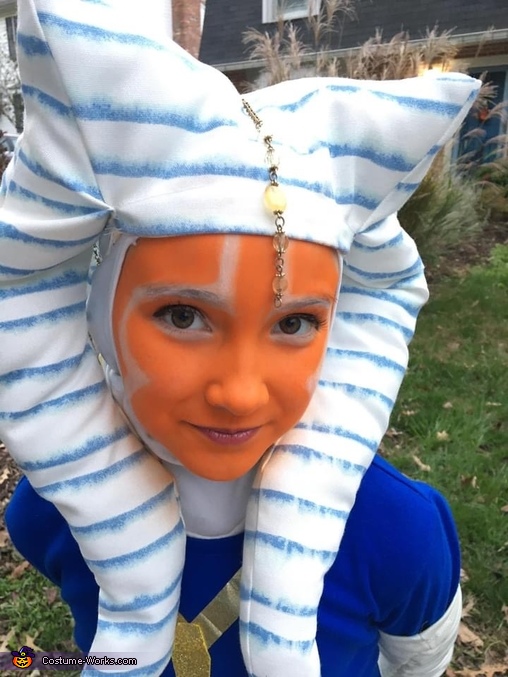 This homemade costume for girls entered our 2020 Halloween Costume Contest.

A word from John, the 'Ahsoka Tano' costume creator:

We were going to go with Star Wars for the family theme this year. My daughter watches Clone Wars and loves Ahsoka. So she threw us a curveball changed her mind from being Rey to being Ahsoka...last week!
So, my wife looks up some patterns, orders one she likes ($5 for the pattern ) and finds the perfect material at Michael’s for the head piece. Snip snip, sew sew, and we had the perfect Snips outfit for my girl! She found it was good to leave the back open and stuff it with room for hair. Then we added a basic Under Armour balaclava which ties it together, while adding a mask for when she’s gotta go “shields up” around people. The top was her own blue shirt we added adornments to, and her own pants and boots. She didn’t want to carry the light sabers so she fashioned some hilts out of construction paper herself. I mean, I know bias, but for a DIY costume it’s pretty amazing.

(Boys Vader costume was from Disney Store, wife’s Leia was borrowed. My Han was really just the wig I didn’t own ;) )