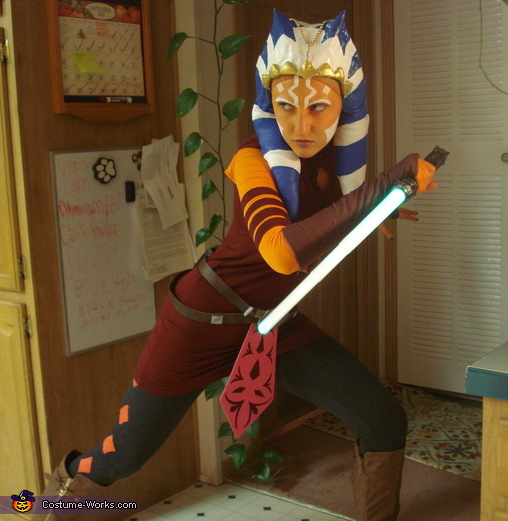 A word from Taylor, the 'Ahsoka Tano' costume creator:

This in a homemade costume made by me, worn by me(with help from my grandma for the adjustments to the dress). The costume probably took about 10 to 20 hours to make, with the top half of the headpiece made of paper mache coated in liquid latex, paint, and mod podge (all in that order in layers). The bottom half is sewn left over white spandex, painted with leftover blue fabric ink and stuffed with poly-fil. The "headband" was made if modeling foam and painted gold, and then hot glued individually on the headpiece. The "silka beads" or "padawan chain" was made from gold and silver (alternating) beads strung on a string, and wrapped and hot glued on the headpiece for security.The dress was hemed to be shorter, and the long sleeves were "unsewed" from the dress. The decal in the middle was cut out, and the belt was hot glued together (although not recommended to be hot glued together) to a cardboard "buckle" painted silver, and a plastic gumpack painted dark brown in the back. The sash on the belt was a scrap from one of the sleeves of the dress cut out and hot glued around a cut piece of cardboard. The fabric was painted with pink fabric paint , and hot glued to the back of the buckle. Velcro was hot glued to the belts to be easy to take on and take off, and the leggings were painted on the sides with mixed, leftover red and yellow fabric ink to make orange fabric ink. The boots were bought, and the makeup on the face is white face paint and a orange makeup pallette. The orange in the hands is also face paint (although I suggest body paint instead) and the nails are painted a dark burgundy. The sleeves were sleeves from an older cosplay, brown fabric (sewn by my grandma around two years ago) that has cut thumb holes in it. The arm bands were cut from the small wrist-part if the sleeves of the dress. The orange on the upper arms is actually orange tights cut in half and worn on the arms (though I suggest sewing the tights someway that is wearable on top, since the tights would sometimes slide down my arms). Ahsoka Tano is a character that first appeared in the TV show (and movie) Star Wars The Clone Wars, and I chose to cosplay with her outfit from seasons 3 and 6.