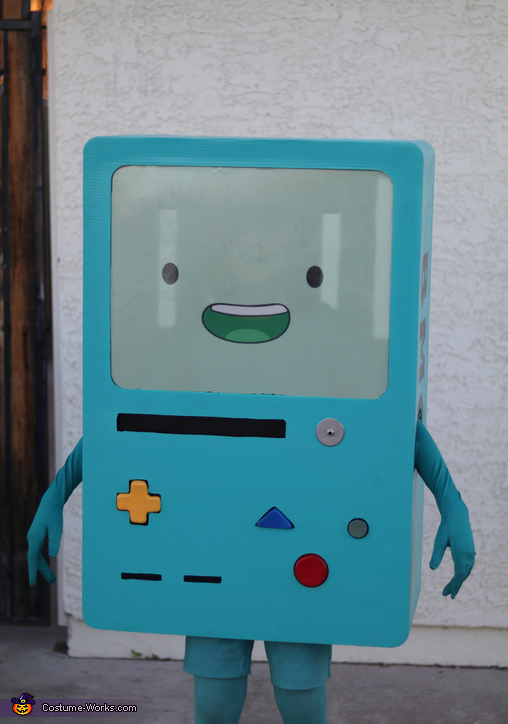 Do you want to play Video Game?!

A word from Brian, the 'Adventure Time BMO' costume creator:

My 11 year old son, Cyrus, absolutely loves Adventure Time! This year, he had his heart set on being BMO for Halloween. I thought it would be an easy cardboard box and a little paint in a weekend project until we started studying pictures of BMO and realized he is actually pretty complex. I had several concerns, one were his rounded corners. Two, he has a screen, making it hard to look authentic and still be able to see. And three, he has plastic buttons, like a hand held video game, that move when pushed.
We worked out a design that addressed all of these concerns. We purchased a piece of 2” PVC pipe, 4 sheets of polypropylene sign board, a whole bunch of plasti-dip in different colors and 2-part epoxy.
I started by cutting the pipe laterally into 4 pieces to form BMO’s rounded corners. I also cut the sign board for the sides, top and bottom pieces. I mixed the 2-part epoxy and adhered one quarter section of the pipe to the sign board, one corner at a time. I allowed each corner to cure, prior to adhering the next corner to make sure it cured correctly. This formed an open box of BMO’s sides, top and bottom. Cyrus helped a lot with this project, especially keeping the sides parallel while I epoxied.
Meanwhile, my wife set to work on the screen design. She edited an image of BMO and sent it to an online print shop to be made into a perforated window cling. The idea was to apply it to a piece of plexiglass so Cyrus could see out, but still have the authentic BMO face.
Back in the shop, I carefully tacked the front and back cut panels onto the open box using super glue. Once set, I applied a liberal amount of 2 part epoxy to the inside edges, making several more trips to the hardware store for more 2 part epoxy. Once cured, I used auto body filler to fill imperfections and the end ‘cells’ of the corrugated polypropylene board to give it a more seamless appearance. I then cut out the shapes for the screen, buttons and disk drive door, as well as wholes for the arms and legs.
Cyrus and I sanded the box with 180-grit DA paper and masked the cutouts, other than the one for the legs, from the inside to prep it for paint. We placed the box on a rolling laundry cart to be able to easily paint all sides and angles at one time for an even look. We sprayed it with several cans of BMO color plasti-dip.
While the paint was drying, Cyrus made stencils for the BMO lettering on the sides. We also cut the button shapes out of foam floor mat and dipped them into plasti-dip for a true plastic look and feel.
When the paint was cured on the box, we used the stencils and a black permanent marker for the BMO lettering on the sides.
The plasti-dipped buttons were glued to a cloth and then affixed from the inside. This created a pushable button, like a video game would have. We added a door for the disk drive, using a piece of cloth for the hinge.
For the arms, my wife ordered long gloves online and then sewed in the pinky for the four-finger look. For the legs, she and Cyrus dyed white tights, shorts and canvas shoes to match.
I added a large block of dense styrofoam to the inside of the top of the box for Cyrus’ head for comfort and eye placement.
The perforated window screen arrived. Cyrus and I applied it to the plexiglass and then, using more 2-part epoxy, adhered it from the inside to the box. The screen really brought BMO to life.
The whole family was ecstatic with how the BMO costume turned out. We love the costume’s authenticity, life like charm, wearability and functionality. The reactions from other people were fantastic, too! Adventure Time enthusiasts really loved seeing BMO walking around! Even those who don’t know the character were blown away by the walking video game. It was fun to watch people try out the buttons, too.
If I had to do the project again, I’d make sure we had plenty of 2-part epoxy on hand, so I didn’t have to go to the hardware store so many times.