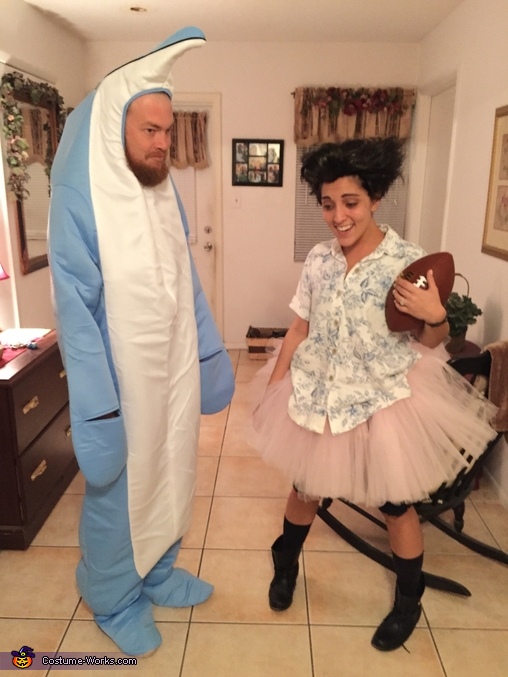 My fiance and I as Ace and Snowflake

A word from Lauren, the 'Ace Ventura and Snowflake the Dolphin' costume creator:

The how to directions for this costume are pretty darn easy. I went to a local halloween store and picked out a "greaser" wig. You know, one of those wigs if you were to be Danny Zuko from grease. When I got home, I trimmed up the sides of the wig and basically shaped the sides to flare upwards. I didn't even need hairspray it just stayed! Next, I went to good ole Goodwill. I found a similar shirt to the one Larry wears at the institution. I also bought little boys cargo shorts as I am a very mini human but any blue cargo shorts would work. Next, I made the tutu by getting a piece of ribbon, measuring it to my waste, cutting pink tulle in strips and slipknotting it over the ribbon. Then, you just tie it around your waist when the whole thing is finished. This was honestly the best part of my costume and I was so proud that I made it myself! This was also the best way to do my tutu as his is sticking out pretty far and is fluffy. I had a hard time finding one in stores that was just right so I just made it and saved a lot of money in doing so! It was also super convenient to take it on and off. It was a little bit time consuming to make, but it was well worth it in the end. Now then, as for the boots, I didn't do much...I just used a pair that I already owned and I wore my Dads socks. But I did find several pairs for a reasonable price at Goodwill and WalMart. For the final touch, I bought a football. Because the real Larry wouldn't be caught dead without one! I went to a costume party with my fiance (He was Snowflake the dolphin) and I will never ever forget the reaction. We were the hit of the party and had an absolute blast. I make my costume every year, but this costume was hands down my favorite. Everyone was hysterical!