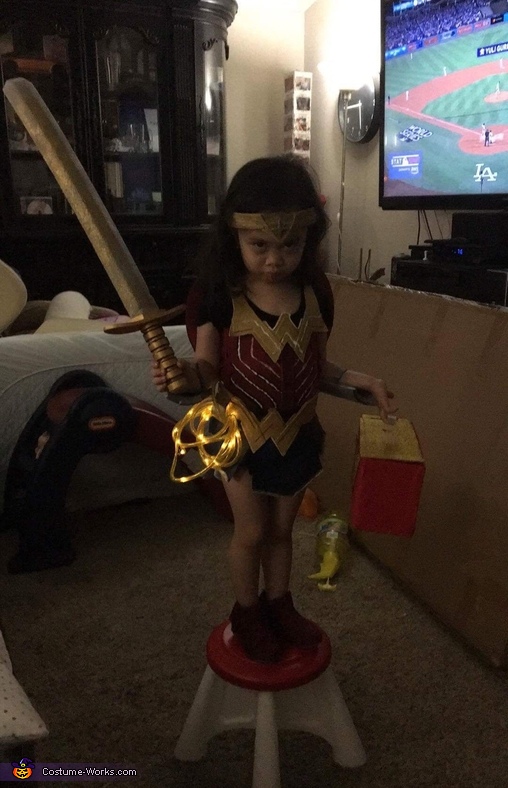 A word from Charm, the 'Wonder Woman' costume creator:

Our 3 yr old daughter, after watching Gal Gadot's Wonder Woman, asked me to make her a costume for halloween! For four years now since she was months old in her first halloween party I,ve been making her costumes. But this year is even harder because of the very intricate detail of WW costume with its accessories. Since it gets cold at night time, i decided to attached her tube top oj her leotards, which removable. I used crochet fabric as the base and red felt, paint, glow in the dark paint for the embellishments. I used cheap vinyl, leather-like fabric for the gladiator skit, sewn the patterns together and outlined the edges with gold glitters and glow in the dark paint. The W logo inher chest and belt are made of the gold glittered foam which i painted mettalic gold and glow in the dark paint too. I cut the patterns to put some texture and embossed effect on it.
With accessories, I used her foam Capt. America's shield for her WW shield. As shown in the picture, the transformation. Gold foam sickers, gold metallic paint and black sharpie were used. Since the shield itself is flat inhad to make it a dome shield, somi wrapped it on her bouncy ball to get the shape of it. Made her headpiece with my left over and scrap gold glittered foam, sharpie and glow in the paint and mounted it onto one of her headbands. For her light up lasso, Bought mesh Tubing at dollar tree and had some led lights fromher last year's tinker bell's costume. Made a pocket for it hide the battery case and switch in her skirt. Her sword is a dollar foam sword which inpainted gold and silver. And finally her trick or treat suitcase for her treats and which served as her keepsake box too for her accessories when not used. It's only the light up gauntlets that i didnt make and of course her burgundy boots which she already had for a time now.