Willy Wonka and Oompa Loompa Aboard the Wonkatania Costume 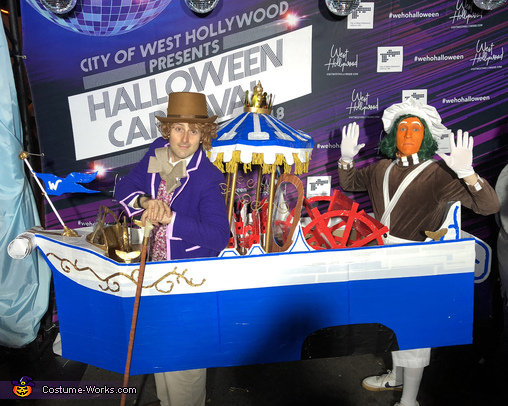 A word from Ian, the 'Willy Wonka and Oompa Loompa Aboard the Wonkatania' costume creator:

Every year my buddy Andy and I like to make some sort of elaborate costume, most of the time from some of our favorite movies. They alway involve some sort of structure, vehicle, or prop. This year, being we both love Willy Wonka, we decided to build the boat from the movie that sails down the chocolate river, the Wonkatania. It is a beloved movie and one of the most iconic scenes from it.
The basic materials of the boat were cardboard boxes, duct tape, and materials bought at a hardware store or craft store. Even our costumes were pieced together. You can buy a Willy Wonka or Oompa Loompa full costume, but we made ours from clothes bought at a thrift store. The skeleton of the boat is 3 extra large UHaul boxes with pvc pipe lining the bottom. The pipes are connected in the corners to make one large rectangle and there are cross bars that make squares around the two holes we stand in. Around those squares we tie individual pieces of string that go to different points on belts that we wear to suspend the boat from our waist so we can walk around hands free. Everything is anchored in and kept together with duct tape. The canopy is made of card board that was cut into slats and taped together to give the umbrella effect and individual pieces of yarn taped together give the fringe effect. The top is a plastic pumpkin covered in duct tape and then surrounded by a gold paper crown and the poles are made of pvc pipe covered in gold duct tape. The wheel, which was able to spin, was made by cutting out a circle on cardboard and measuring exact spokes around a center circle and cutting out the insides. Then tracing the design onto another piece of cardboard and cutting out the insides as well. Now we had each side of the wheel. Covered in red duct tape, we then taped a piece of pvc pipe to act as the center axel and used 8 identical rectangles taped to each side to act as the paddles of the wheel. A wooden piece of a hangar was used to go through the pvc pipe and attached at each end to the boat so the wheel would spin freely. Everything else was made with cardboard and then covered in colored duct tape: the chairs, rudder, the bow of the boat, the cleats, the windshield, etc. We then used plastic sheets from a school binder to create the windows. Copper wiring was bent to crate the brass "squiggly" designs on the poles of the canopy and one was attached next to the steering wheel and a bell hung from that. The steering wheel was made from a styrofoam ring and tape. The flag had a wooden dowel as the pole with a plastic pumpkin on top, all covered in tape and the flag itself was cardboard. Finally the outside was different colors of duct tape to show the colors of the boat and small pieces were placed to show the detailed art on the sides of the front.
All in all it took about 60 hours and around $200 to make. Every year we go to the West Hollywood Halloween Carnival in California where they shut down about 10 blocks and thousands of locals gather to celebrate and either wear and look at great Halloween costumes. Worth every penny and second. It was a lot of fun and we were very happy with the outcome!