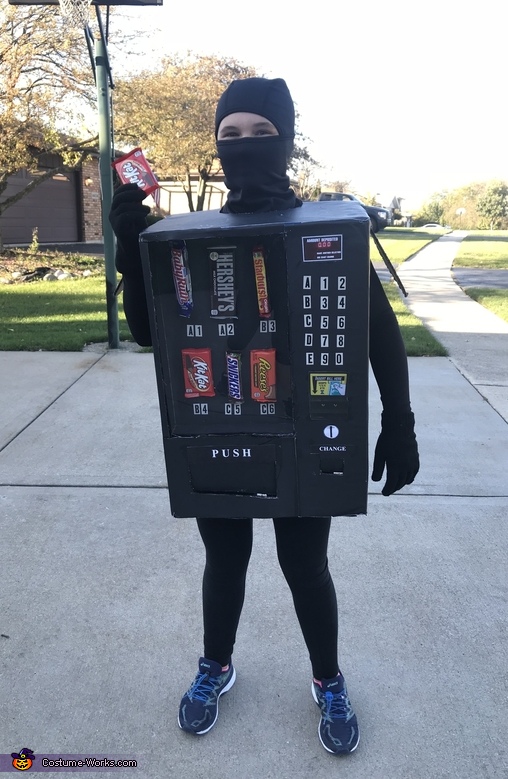 A word from Anita, the 'The Vending Machine' costume creator:

So this year I decided to make a vending machine. I wanted to make an original homemade costume which i have never done before. I decided to make a vending machine since i thought it would be a fun costume to make and I would possibly get some pretty good reactions from it. I will be sharing how I made this costume and some funny reactions I have endured while wearing it. So, lets start on how to make it! I made my costume with the following materials. A large cardboard box, Black construction paper, glue, a razor knife, hot glue gun, candy bars, a piece of clear plastic, string, hole puncher, and paper print outs of the numbers, letters, push sign and coin slot. Also black pants, shirt and mask. Now the steps to make this costume. First I started with a large cardboard box I could fit in and bought some black construction paper to glue it on each side of the box. Then I made an outline of a rectangle to cut out a nice shape for the candy to go in. I also outlined the armholes and were the head hole at the top. I followed up with this by cutting neatly on the outline so my head fit through the top and my arms were comfortable. Now for the front of the machine were I outlined the rectangle, I cut out the top of the outline the bottom and the right side leaving the left side still on the box. With this I slightly bent the cardboard to make a nice back round for the candy. At this point a black sharpie was needed to go over any of the showing cardboard to make it black and so it would blend in with the construction paper and no cardboard would show. Then I duck taped shut any loose areas or parts that you could see through. After that a hole was punched in the back of each wrapper and poked a hole through the box and tied the rope onto the back of the candy wrappers and from inside the box so the candy stayed in place. I repeated this process for the next five bars. Once I finished that part I glued any loose bars down. The numbers and letters where cut out and placed to stick on under the candy for example A1, A2, B1, B2, etc. I also added the numbers and letters to the side of the box as well. After that the clear plastic was cut to fit into the rectangle space in the front that I had cut out earlier. I glued it down with a hot glue gun and let it sit. Then the coin slot button and the push sign was glued on and I cut a square under the coin slot and cut a rectangle under the push sign so it could push it. The last thing I did was make sure everything was secure and go over any more cardboard shown with sharpie.
Now for the reactions that came from wearing this costume. I wore all black clothing underneath including a black full face mask. I went to a small Halloween party and here's some reactions I received. Some little kids tried to actually get candy from my machine by clicking the buttons of course it didn't work but it was cute and happened multiple times. Another reaction I had was someone Tried to lean on me since they thought I was a real machine and they didn't realize I was a fake at first until they looked back and saw for themselves. One final reaction I got was when my friends just really enjoyed the idea and creativity of my costume since it was different from other costumes. That's it hope it was a good essay and hope ya enjoy my costume.
This costume was made by me Dakota Austin with the help of my mom for the safety parts like using the knife. I am 12 years old