The Vending Machine and the Claw Machine
by Cynthia 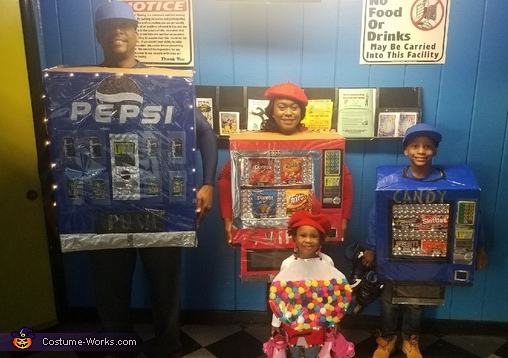 A word from Mikela, the 'The Snack Machine Family' costume creator:

Dad(Evan July II) is a Pepsi machine, Mom (Mikela July) is a chip machine,son (Evan July III) is a candy machine, and daughter (Essence July) is a gumball machine. The idea resulted from my daughter insisting on being a gumball machine. I wanted us to do a family theme and thought, we could each be a snack machine of some sort. I found some pictures on google images and got a general idea of how to bring my ideas to life. To make the vending machines, I used cardboard boxes, cut out holes for the head and arms, and a 3rd large, square hole was cut for snacks for the chip and candy machines. The boxes were then wrapped in wrapping paper. The lids from other boxes were used to make the "shelves" for the candy and chips. The shelves were wrapped in mirror-like tape and a reflective strips cut from a cool paper folder. C-shaped, metal wires were placed at the bottom of the candy and chips to give the winding dispenser effect. The Pepsi machine has printouts of soda cans that were taped onto folded construction paper for a 3-d effect. The Pepsi machine has reflective strips and aluminum foil around the bottom. Printouts of dollar inserts, coin slots, change dispensers, and Pepsi logo were found on the internet and markers were used to color them. Stickers were used for the words "Chips", "Candy", and "Push". Battery operated Christmas lights were placed on each costume and all costumes were wrapped in clear gift wrapping plastic/paper. The top of the gum ball machine is made of a cardboard cutout. Pompoms were glued to it and a white felt sheet was glued to the top. The skirt was made of red felt sheets, sewn together with pipe cleaners along the seams. Miniature pompoms were glued around the bottom. And miniature pompoms were also glued around the laced socks. Black tape was used for the lever that "turns the quarter" and a gray felt cheat was used to make the coin slots and the gumball dispenser.