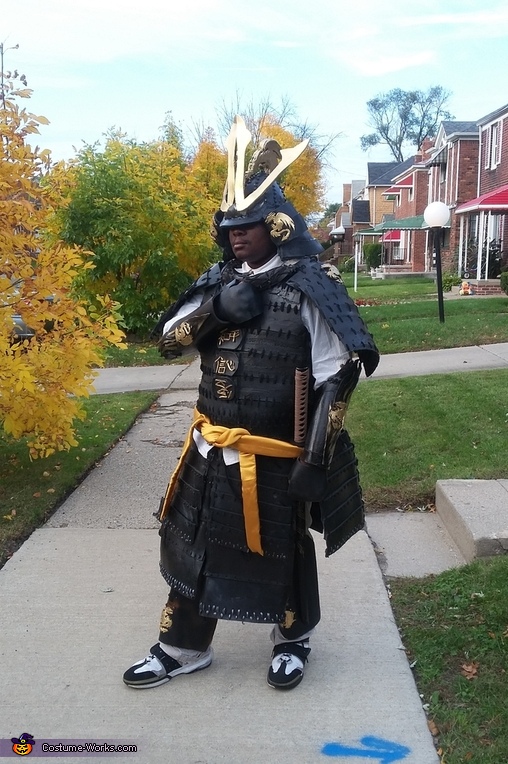 A word from Michelle, the 'The Samurai' costume creator:

Javon, my son ,loves Asian history, he took karate classes when he was young. This year he wanted to be a Samauri, so we got to work. First I purchased closed cell foam , measured his waist ,arms and shoulders and added 4 inches. I measured rectangles 4 inches by 6 inches, marked and cut the rectangles for the chest and back, also for the shoulder guards the foam was 7 to 8 in. The waist guards and leg guards were longer and wider. I drew dragon patterns my son picked the one he wanted so I cut them out, my son and I took turns drilling all the holes marked and the Dollar store provided the black yarn needed, each strip was cut in half for flexibility, the arm guards and leg guards were measured , and the hand guards were cut oUT using his hands as a template, again the Dollar store had plenty of long black fabric ponytail holders , they were used for the guards, and a double looped belt and yarn held the waist guard in place, the helmet was cut in 4s with the bottom were half moon shapes, hot glue was used for the helmet horns and dragon, and with the exception of the Dragons on the shoulders arms and legs guards and the Chinese writing of piece, love and faith, not in that order, everything else was hand sewn together, the whole outfit was painted and sealed