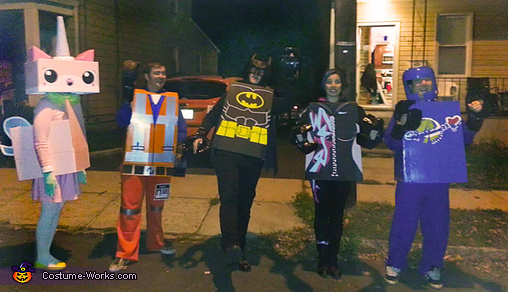 A word from Brendon, the 'The Lego Movie' costume creator:

My name is Brendon Phillips, I was Batman. My girlfriend Sarah is wildstyle, with friends Marc as Emmet, Kim as Unikitty, and Chin as Benny.

I originally conceived the idea for this costume after seeing this summers "The Lego Movie" and becoming obsessed with the character of Batman in the movie. It instantly shot to my 3rd favorite movie of the year.

Sarah and I have been together for over 8 years. EVERY year she begs for a couples costume to no avail. FINALLY she got her couples costume...but I didn't stop there. I realized this was the perfect franchise for all types of characters, and enlisted my friends to fill out the other major rolls in the movie.

As for construction I personally built the bodies for Batman, Wildstyle, and Benny from cardboard, duct tape, and spray paint. Also the helmets for Batman and Benny, which I made from giant Cheese Ball tubs, a mixing bowl to round out the top of the head, and for batman, a $5 batman face mask hacked apart and re purposed and reattached accordingly. I also built the hands for all the costumes literally on Halloween day last minute from foam, cardboard and duct tape, as I realized the hands would sort of complete the whole look.

After constructing the bodies, my wonderful artist girlfriend Sarah then hand painted the designs on the bodies of Batman, Wildstyle, and Benny.

Marc built his Emmet body himself based on the same pattern used on the other bodies.

Everyone was responsible for their own accessories such as hair color, under clothes etc.

As for the most unique of them all, Unikitty was completely constructed and finished by Kim (the girl wearing it). I give her a lot of credit due to the fact that her character was the most "off the norm" lego character.

The reaction during our pub crawl was incredible. people CONSTANTLY taking pics with the group, all official photographers asking for numerous group shots. We won 3 group contests at various bars... and even had people screaming lines from the movie from 5th story apartment building windows.

HANDS DOWN THE MOST AWESOME HALLOWEEN IN MY 30 YEARS OF LIFE!

It was a total team effort!