The King Of All Cosmos Costume 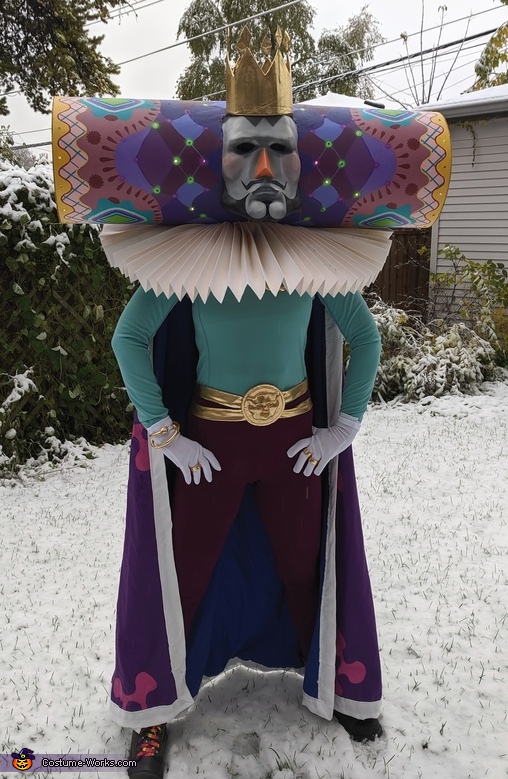 Finished King Of All Cosmos

A word from Aimee, the 'The King Of All Cosmos' costume creator:

I'm one of those people that lives for Halloween, so when August rolled around and I still didn't know what I was going to be, I was concerned. I got Katamari Damacy Reroll for the Switch, and then it dawned on me- The King Of All Cosmos! I found a Kylo Ren mask at Goodwill that fit me well, so I used that and one of those carboard tubes for pouring cement footings as my base. I built on top of it using carboard, newspaper, grocery bags, and hot glue and then sculpted the remainder out of leftover joint compound and spackle. Lots of paint later, I had a workable head. I ended up drilling holes and gluing battery-operated Christmas lights into it for extra sparkle! I found the blue shirt at Goodwill, but struck out finding a suitable cape or leggings, so I ended up buying fabric at JoAnn to make those. The crown and jewelry are made from carboard, sculpey, gold fabric, and more hot glue. I used cheapo paper drywall tape and fusible interfacing for the collar, which is zip tied to the headpiece. It's hard to say exactly how much it cost, since much of it is made from garbage and leftover items laying around the house, but what I spent in new materials came in around $45, with the fabric being the biggest expense. I made it for myself, so it's me in there for the final pictures!