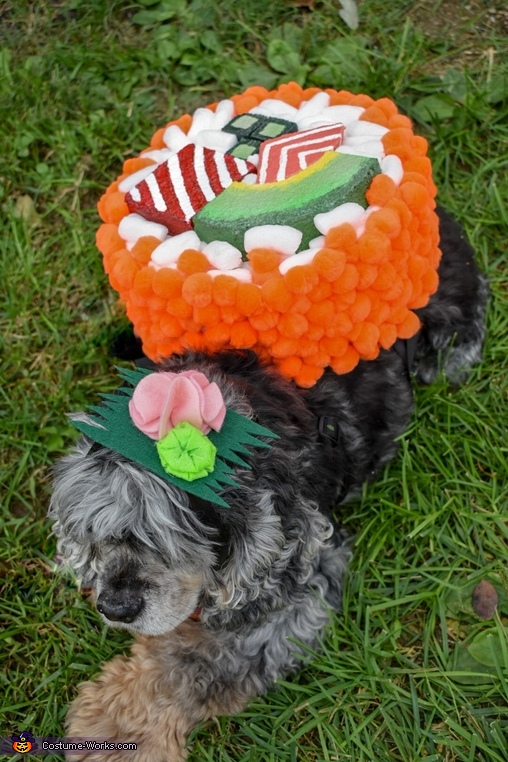 A word from Mariah, the 'Sushi Roll Dogs' costume creator:

Every year I make my dogs' Halloween costumes. In July or August I always look online at popular DIY kids costumes and find one I like that I think I can transform into a dog costume. Usually I gravitate toward food costumes (which my food hound Jensen doesn't mind) and this year was no exception. There are lots of dog sushi costumes, both homemade and store bought, but they all involved a white t-shirt and a piece of salmon fabric on top and a black band. Whereas there are some really cool kids sushi roll costumes so I decided I wanted to recreate them for my two pups.

A few words of caution: the biggest problem I had with these costumes was getting them to stay on when the dog walked. I tried everything (and I mean everything). I tried ribbon, elastic, velcro, tying it to the dog, tying it to the harness, having multiple pieces of ribbon tied in different places (around the neck and around the middle). Nothing worked -- the roll kept sliding off the dogs back and falling at their side, which would have been okay had I done two rolls for each dog (one for each side) and had I been able to prevent the roll from hitting the dogs legs making it hard to walk. I used these costumes for two contests -- the first you stood in one spot and the judges came around. For that contest these costumes worked fine. But for the second contest I knew would have to parade in front of the judge so I had to come up with a solution. I made a box that slipped over the dogs head and glued the roll to the top of the box. The box was very tight to the body so it kept the roll upright. I made the box black, but if I'd had more time (and I hadn't been doing this the night before the second contest), I would have made the box look like a plate or made it wood grained.

Also, this is the second year I have worked with pom poms. Last year no matter what glue I tried, pom poms kept falling off. But this year I tried Aleene's Foam and Felt glue and it worked amazing!! The pom poms stayed on the sushi roll. I used this same glue to glue all the foam pieces together. Like all other glues I've tried, I found that it did not work on the stiff felt I used to make the soy sauce bag or the headband (hot glue was needed for those), but I will never use any other glue for pom poms or foam again.

I also wore a sushi costume although its not pictured. I have include instructions for the human costume as well.

My pups won first place in both the contests they entered. While I was happy with how the rolls came out in the end (and I loved the ginger and wasabi headbands) these costumes were a giant pain all because of the issues trying to get the costumes to stay on. They were like avant-garde fashion -- pretty to look at but not wearable. Hopefully if you attempt this costume for yourself you'll have better luck finding a solution for it to stay on.

LIST OF ITEMS YOU NEED
Dog costumes:
-foam cake form for rolls (I used the largest size for the black and white dog and the medium size for my smaller dog)
-foam to cut into shapes for ingredients inside the rolls
-foam balls
-orange pom poms
-packing peanuts (be careful -- all packing peanuts now are biodegradable and will dissolve if they get wet -- I got mine from Fed Ex because it was the only place that had the white that were straight and not curved)
-black faux suede (use the back shiny side as seaweed around the one roll)
-green stiff felt
-lime green and light pink felt
-black thin ribbon (for hat)
-elastic, ribbon, etc.
-homemade box covered in black felt
-reusable grocery bag to make into soy sauce packet using stiff black felt, red felt, white felt
-various colors of paint to paint the foam that you've cut into avocado, salmon, fish eggs, etc.
-Aleene's foam and felt glue
-hot glue
-Fabric fusion glue
-shiny mod podge
-white paint


INSTRUCTIONS
Dog costumes:
-To start I cut out foam pieces to look like avocado, salmon, etc. that I was going to put inside the sushi roll. I painted these foam pieces the way I wanted (including painting the foam balls orange to be fish eggs). I then applied shiny mod podge to the outside to make them shiny. Note -- when I cut the foam into the shapes I wanted, little pieces were flaking off so before I painted the foam, I first covered it in mod podge on both side and then once that was dry I painted a solid white layer all over each piece as well. This kept the foam intact. The foam was also glittering so this kept the sparkle from from shining through my paint.
-Next I took my two foam cake forms and again because the foam was kind of flaking and glittery, I covered the whole thing first in mod podge and then in white paint.
-Then I laid out my pieces of foam I had painted out on the top of each cake form until they were the way I wanted them. I glued these pieces down with Aleene's foam glue
-Then I laid out the peanuts the way I wanted them. These peanuts were a little big for the smaller cake form so I smashed them up until I was happy with the shape.
-Once the inside of each roll was done, I worked on the outside. For the roll covered in fish eggs, I glued orange pom poms to the outside using foam glue. In working with pom poms, I've found its best to randomly glue pom poms down all over (not right next to each other) and let that dry a little before you go and fill in spots. This keeps you from accidentally knocking off anything because you are gluing next to something that is already dry. For the other roll, I took black faux suede and I used the back side (shiny), I cut it down to the size I needed allowing a little room on each side. Because the fabric was going to fray, I used Fabric fusion glue and glued down a little hem all around the piece of fabric (you could also sew if you have a sewing machine but then your thread will show). I glued this fabric down on the foam using the foam glue.
-This is where things went off the tracks because I had to attach it to the dog-- I first tried glue 2" elastic to the middle of roll and tying that around the middle of the dog. When that didn't work, I added a thinner piece of elastic to be tied around the dogs neck. When that didn't work, I used 2" ribbon instead of elastic (thinking that the elastic was causing the problem). I tried tying both the elastic and the ribbon to the dog and to the harness. But nothing worked. For the second contest, I cut up a box until it fit snugly around my dog, hot glue black felt to the box, then hot glued the cake foam to the box.
-For the headband, I took dark green stiff felt and cut it into a jagged seaweed shape. I then took lime green felt and cut it into a star fish shape. I folded the ends of the star fish into the center and hot glued. I then did the same with a bigger star fish and then glued the two together to make the wasabi. For the ginger, I cut four circles out of pink felt and one larger circle, I folded each of the smaller circles in two both ways and glued to the larger circle. I then lifted up the smaller circles and glued the pieces together until it looked right for the ginger. I glued the wasabi and ginger pieces to the dark green felt that looked like seaweed. I then glued black ribbon to the dark green felt to make a head band (I glue two pieces of ribbon to each side -- one to go in front of the ears and one behind).
-For the soy sauce bag, I cut the soy sauce logo out of stiff black and white felt. I took a reusable grocery back and covered it in stiff black felt using hot glue. I then took a piece of stiff red felt, cut out two rectangles, and made the ends jagged for the packet. I glued the stiff red felt to the bag and put the soy sauce logo on the front.

Human costume:
-For the human costume I took salmon colored fabric and cut it into the shape of shrimp and made a pillow. I then glue white ribbon to it in the shape of a V.
-For wasabi and ginger, I took the same dark green stiff felt I used for the dog head bands and made a 2 pieces of seaweed. I then made wasabi and ginger using the lime green and light pink felt just like I did for the dog head bands. I glued the ginger to one piece of seaweed and the wasabi to the other piece. I then cute two pieces of 1" elastic big enough to go around my wrists. I glued the wasabi seaweed to one piece of elastic and ginger to the other. I just used safety pins to attach the elastic around my wrists but you could also sew it.
-I wore all white, put the salmon pillow on my back, and tied it to me with a piece of 2" thick elastic. I then put chopsticks in my hair and put the wasabi and ginger elastic pieces around each of my wrists.