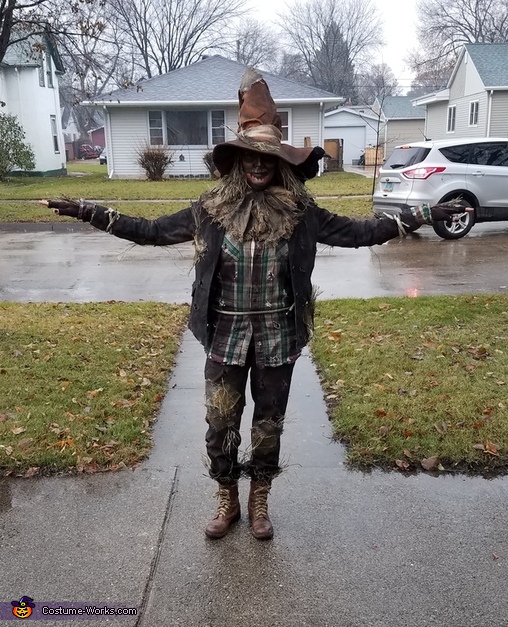 A word from Cinnamon, the 'Scary Scarecrow' costume creator:

I wanted to go big this year with something original yet with my own touch of creativity. I decided to do a creepy scarecrow. I started this costume by purchasing the Jacket, Shirt, pants and boots from local thrift stores. Then I purchased the hat from party city, and the extra fabric, burlap, elastic, and straw from Hobby lobby. Once I had all the pieces I wanted to create this costume I started with making patches out of the fabric and burlap that I bought. I first cut out the shape with scissors, then took an exacta knife to the ends to give it a frayed look. Once those pieces were done I laid out the jacket and pants and hot glued those pieces on. For the pants I put patches on each leg, and then on the jacket I put one on the front pocket and one on each elbow. Then I cut out strands of the straw and stuffed it into the patches. I also did this to the hat. then from there I wanted to give it a old warn look so I added holes, and cuts to the shirt, pants, and jacket. It didn't fray the best just by doing that so I ended up taking a wire brush and scratching each of the cuts I made to give it a more depth worn look. Once I completed that I found an old pair of fitted gloves that you can buy at Walmart for $1 and cut the tips of each finger off with the exacta knife to give it a frayed look. Then I cut strands of the straw and glued it to the top of the gloves so it would look like I have straw coming out of the sleeve of the shirt. Once I finished that I made the neck piece by cutting out a large circle from the burlap I purchased. I wanted to be able to pull it over my head and make it snug with my neck so to do that I cut out a smaller hole in the middle. Then I took a piece of elastic and measured it around my neck. I glued both ends of the elastic together to get the circle shape. From there I took my piece of cut burlap and hot glued the smaller circle to the elastic overlapping it here and there to give it the ruffle look. Then I took my exacta knife and frayed the ends of it. Then with extra pieces of elastic I made 2 ankle bands so I could have straw coming out of the boots without having to glue it to the boot. I took that elastic and wrapped around my ankle to get the length that I needed. I then cut the straw pieces and hot glued each strand to the elastic. For my hair I cut out the pieces of straw to the length I wanted the hair to be, and then glued each strand to the inside of the hat. I then decided to add a crow to the shoulder of the jacket. I hot glued his feet then took a needle and thread to sew on the feet better so I wouldn't lose it. Once I had all my pieces together and had the patches and straw where I wanted them I laid each piece onto a old bed sheet in my backyard to add more of a distressed/old worn look to it by spray painting black paint to it. From there I wanted it to look more old so I took a brewed pot of coffee and a sponge and soaked each piece until it gave it that brown stained look to it. I then hung it up on hangers to dry and air out. For my makeup I purchased Black contacts online, and had a friend airbrush my face. Overall this costume costed me $80 all together, but was worth every penny. I had so many compliments and it turned out better then I imagined!