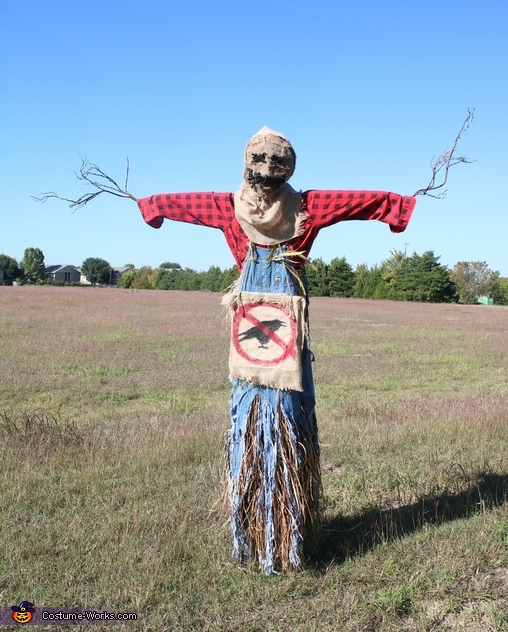 A word from Haiden, the 'Scarecrow' costume creator:

This Halloween, I wanted to create a giant scarecrow as my costume. We finished it in time for me to wear to a Halloween party, and I really love how it turned out.
First, we started with a pvc base that fit over my shoulders and around my back and chest. We built it up to 8' tall and in the shape of a "T" at the top (to attach his scarecrow arms).
Next, I used paper mache over a balloon to form his huge scarecrow head. When it dried fully, I glued on the burlap and rope stitches in the eyes and mouth.
We bought artificial sticks to serve as his arms and glued them inside 2 pvc pieces. The arms were too wide to fit in a vehicle while on the base, so we drilled holes in the pvc and attached them with bolts so they would be removable.
I put the red plaid shirt over his base and sewed it on to keep it in place. Then I added the extra large pair of overalls onto the base, and shredded them at the bottom.
I sewed in many swatches of artificial grass and two other pairs of shredded jeans to the bottom of the costume so it would reach to the ground. I was trying to get the effect of the scarecrow coming to life and bursting out of his overalls kind of like the incredible hulk.
Finally, I had to figure out how to see out of my costume. Any type of see through patch I tried, just looked out of place. So I decided to make a "No Crows" sign in order to disguise where I see out of. The black crow is made from burlap that is really easy for me to see out of.
Overall, I am really excited about how it turned out. On Halloween, I had so many people compliment my costume and stop me for pictures.
I am 12 years old and had the help of my parents, grandparents, and brother to create my scarecrow. It took us a couple of months, working on him in the evenings, to finish.