Rocky Balboa and Paulie with The Meat Costume 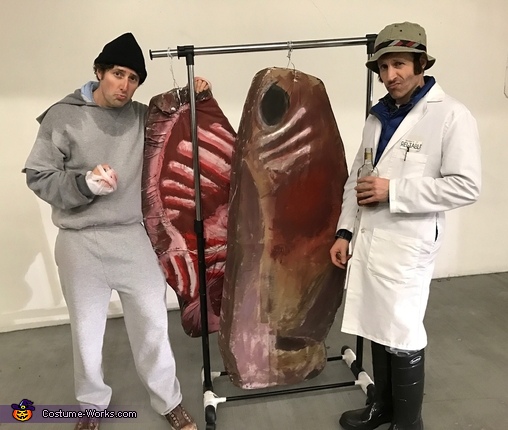 A word from Ian, the 'Rocky Balboa and Paulie with The Meat' costume creator:

Every year my buddy and I make an elaborate costume for Halloween. We usually do something from a movie and usually have some sort of big prop. We thought about doing Rocky, but many have done it before and we thought it was missing something so I jokingly said it would be cool it we incorporated the meat. One of the most iconic moments in that movie franchise is when Rocky and Paulie are in the meat freezer where Paulie works and Rocky starts boxing the meat. So we had our idea
We are sticklers for the specifics so our costumes are very detailed to the actual costume the actor wears. Paulie wears 4 layers so I had to wear the exact 4 layers: white T, flannel shirt, blue puffy jacket, and lab coat. Rocky wears a grey sweatshirt with the sleeves cut off over a long sleeve grey sweatshirt. We usually go to thrift stores or Salvation Army to get cheap clothes or props. Using some of out own clothes we only needed to buy a few articles of clothing. I took a thin necktie, cut it, and glued it to a hat I already had and my friend wrote Italian Stallion the way Rocky did on the back of a sweatshirt he bought. Other details, I bought the high rubber boots at a thrift store, got some cheap sideburns from a halloween store, made a name tag that showed the meat company, and he put some red on gauze he go to put around his wrists.
The meat was a little more complicated. I bought a clothing rack at Ross. Then outside of a thrift store I saw a couch by the garbage. We took 4 "square" cushions from the couch, removed the covers so we had just the foam, stuck a dollar store broom handle in the bottom of one and the other side in the top of another to have some stability with the two pieces. Did that with both "square" pairs to make two "rectangles". Then we cut out the shape of the meat, using the movie and pictures as reference. Then wrapped white sheets tightly around each piece of "meat" and pinned the edges closed. Then we sewed the edges shut and cut off the excess. We then took a wire hanger, opened it up all the way and poked it through the top of the meat and rapped the ends around the crossbar of the rack so it hung like meat in a freezer. We then drew on the sheets the way the meat should look and our friend helped us paint it to look like real meat. So they hung like meat and were soft enough to withstand punching all night!

Here's a video of the costume in action!
https://www.youtube.com/watch?v=d7Q5cqdRrIw