Rick and Morty
by Oliver

Rick and Morty
by Daniela

Rick and Morty
by Stephanie 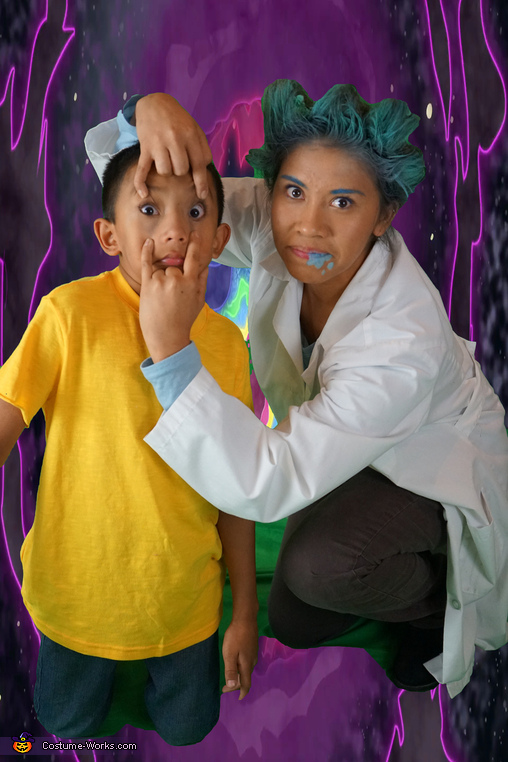 You think you're gonna see that kind of thing is school? Just look at it lumbering around. It defies all logic -- that thing.

A word from Aissa, the 'Rick and Morty' costume creator:

My nephew and I are the Rick and Morty from universe C138; staging in an alternate universe from the popular animated series "Rick and Morty." The series is about the adventures of Rick, a genius and careless scientist, with his grandson Morty, a anxious boy who is not so smart. Together they explore the infinite universes; causing mayhem and running into trouble.

The costume in total cost around $30. The articles of clothing were individual handpicked from thrift stores (shirts), and our own closets. The pants are my nephews own jeans, and I am wearing my brother in laws work pants. The lab coat is from my sisters nursing program. The hair was not a wig. It was my own held up by A LOT of hairspray. I bleached and dyed it aqua with a Loreal kit and touched it up with a colored aqua hair spray from Walmart. I also purchased from Walmart a white and blue face art crayons for my "drool" My sister (nephews mom) shot and edited our photos. We selected portals for backgrounds since the series consists of the characters hopping universes through portals.

The inspiration for the poses are images favorited by fans of the series and used very often. The original poses from the animated series are uploaded as well for comparison purposes.

"It goes without saying that the Rickest Rick would have the Mortiest Morty.”