Rainbow Brite and Twink the Sprite
by Mallory 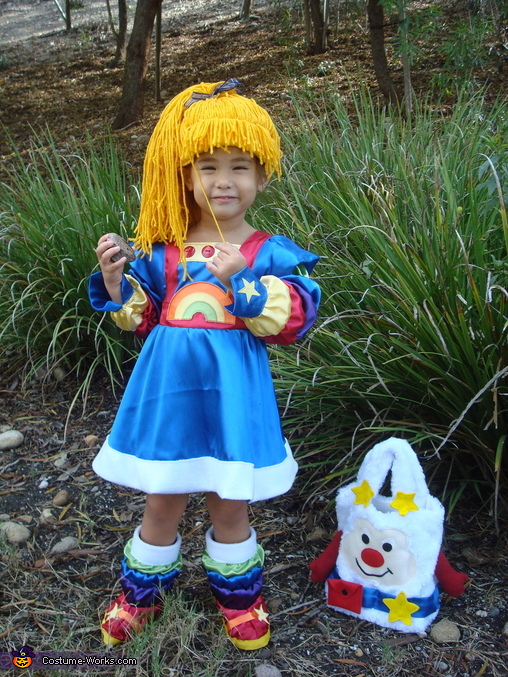 A word from Hope, the 'Rainbow Brite' costume creator:

Growing up in the 80’s, Rainbow Brite was one of my favorite cartoon characters, but sadly I never got to dress up as her for Halloween. This year I decided to relive my childhood memories by transforming my 3 year old daughter into Rainbow Brite for Halloween.
I took her trick or treating twice, once at Sea World the week before then again on Halloween night and we received so many wonderful compliments. None of the kids her age knew who she was but she was definitely a BIG hit with the parents my age and grandparents who have kids my age. I had so many people tell me it’s such a nice treat to see a completely different and unique costume and some even thanked me for sharing some good memories. My daughter loves being complimented on - the more compliments she got, the livelier she became. By the end of both outings, she was dancing around and flaunting her costume.
I work full time so I decided to start the costume a couple of months early to avoid the last minute stress. Armed with a picture of Rainbow Brite and her sprite Twink, I headed to Joann’s and bought some costume satin and fleece to make the dress and boot covers. I also bought fake fur and felt to make a trick or treating bag to resemble Twink, her side kick. I used a pattern I already had as a starting point for the dress and sort of winged the rest. I decided it was too hot to have the rings on her sleeves and boot covers stuffed, so I gathered the material to make it puffy. Lastly because my daughter has brown hair, I decided to make her a wig out of yellow yarn to complete the look. I sewed a basic beanie cap out of matching yellow fleece and attached the yarn to the brim. Then I pulled the yarn up and tied it into a ponytail. I added elastic around the brim of the cap to make sure the wig stayed put.
Total cost of costume (dress, wig, boot covers, and trick or treating bag) was around $40 (I used a bunch of coupons to purchase the material). I probably spent 6 weeks on and off sewing it – the reaction I got from both my daughter and crowd was well worth the effort!