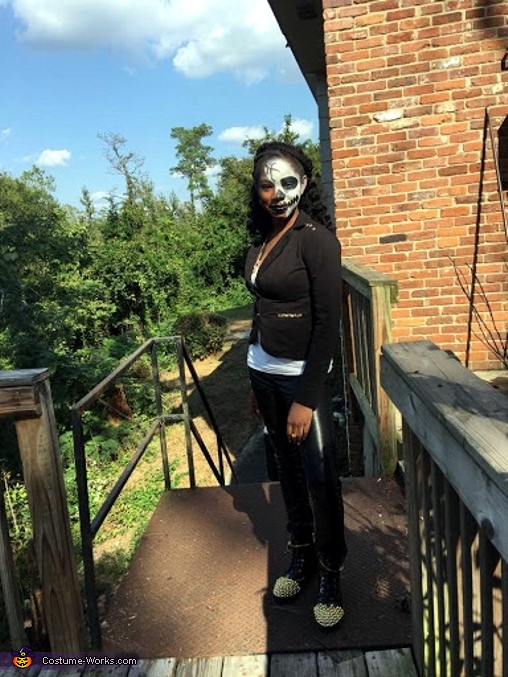 My name is Kimora. I’m the one who created this costume. I started planning the costume in 2016, and it was officially completed as of the beginning of 2017. The idea came from Monster High. The doll name is Zombie Gaga. I added a twist of punk rock to it. First, I had a blazer all ready in my closet and some leftover gems on hand from a previous project. I glued the gems to the blazer and let it dry for two hours. When it dried the blazer was done. Next, was the cami like I said with the blazer, but instead I use E6000 clear glue to make an upside down triangle, bow tie, skeleton rib cage just to be creative. Now, for the pants I got the pants from Roses a location outlet store, and they cost approximately $7.00 dollars. Good thing I got the pants on clearance. For the shoes I made them using gems, and spikes that I already had. Now the face paint just go crazy with it. My face paint that I’m using is skull makeup from Walmart it cost $1.98. My whole costume cost $8.98. Which is a good thing my budget was $20 dollars so it was a win win for me.