It Pennywise and Georgie
by Amanda

Pennywise and Georgie
by Nicole

Pennywise and Georgie
by Ashlee 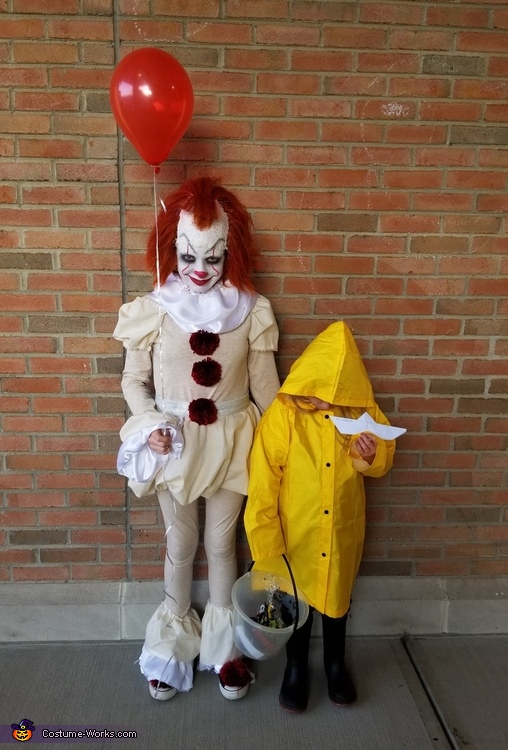 A word from Aimee, the 'Pennywise and Georgie' costume creator:

This is two of my daughters, Baylee 13 years old as Pennywise and Maycee 6 years old as Georgie. Inspiration is from the new IT movie that came out in September 2017. Both costumes are homemade. The Georgie costume was simple; rain boots, rain jacket, jeans, and a paper boat that says S.S. Georgie. To make Pennywise, (Everything from Wal-Mart except the wig. We ordered it online) I bought a long sleeve shirt and leggings, silky fabric to make the ruffles, a little heavier fabric close to the same color as the shirt and pants for the ruffles and puff sleeves, elastic for the skirt, deep red yarn to make the puff balls on the shirt and shoes, makeup, latex and the wig. I hand sewed the puff sleeves on the shoulders, the neck ruffles and the ruffles on the sleeves and legs. I used a sewing machine to make a circle skirt (watched a video on YouTube to know how to do that) and folded it up under to make it look bubbly. I used the Wal-Mart brand white cream Halloween makeup and Elf eye shadow and lipstick for her face. I used latex to smooth the edge of the wig on her forehead. It took me probably a total of about 7 hours to make the costume (over several days after I got home from work and in between being a mom LOL) and from start to finish it took about 2 hours to put the wig, latex and makeup on. I spent around $150 on everything for both costumes. And I am not good at sewing. I actually surprised myself. LOL. We had a really good time going out on Halloween. The girls won Best All Around at the kids costume contest at our local library and they were one of the winners at their school costume contest as well. Baylee has had a blast scaring people. Strangers wanted their picture taken with them all night long. We have gotten so many compliments. Baylee really needed something positive to boost her morale. She started a new school this year due to being bullied at her previous school and this really lifted her spirits getting all this attention. People are telling her she is famous on Facebook and Instagram because the people who took their pics with them have been posting them. Thanks for taking the time to read this. Halloween 2017 is definitely memorable!!