The Peanuts Gang
by Kimberly

It's the Great Pumpkin, Charlie Brown
by Brian

The Peanuts Gang
by Eileen 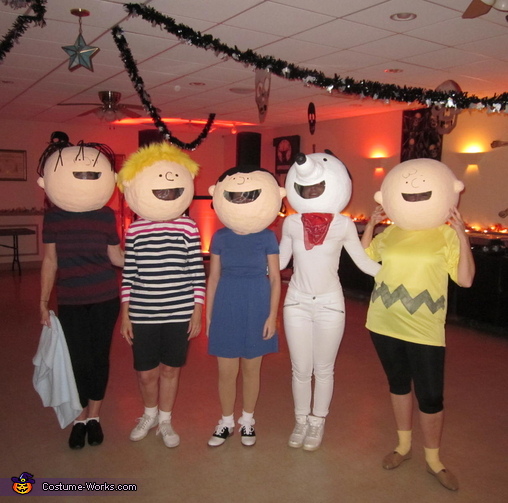 A word from Silvana, the 'Peanuts Characters' costume creator:

Every year our office has a Halloween Party and Costume Contest. Our group decided to be the Peanuts characters. We purchased white inflatable beach balls and covered them with paper mache made from flour and water. Once they dried, the ball was deflated and removed. First, they were painted with flesh color paint. The mouth was cut so that we could see thru it and the eyes and nose were drawn on. The hair for Pig Pen was made from black pipe cleaners, for Lucy from black felt, and for Schroeder , a yellow feather boa. The snout for Snoopy was made from the top of a plastic soda bottle. I attached it to the head with additional paper mache. His ears were felt.
Lucy wore a dress, the rest of us wore shorts and t-shirts-the signature Charlie Brown stripe was drawn on a yellow t-shirt with black marker. Linus carried a blanket, Schroeder’s played a toy piano. For our party each group also performs a skit to go along with their costumes, Schroeder played his piano and the rest of the group danced to the Charlie Brown theme song.