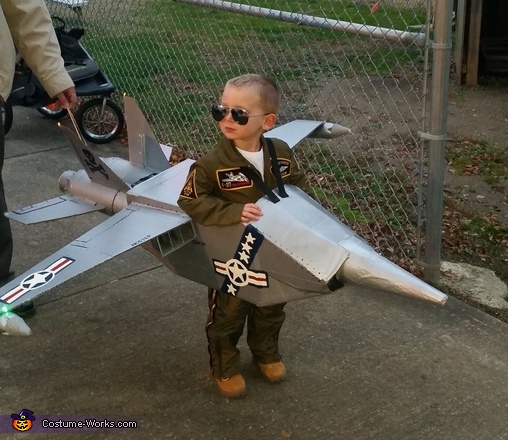 Who's lost that lovin' feelin'?

A word from John, the 'Navy Jet' costume creator:

Our son is a big fan of the Navy Jet characters, Echo and Bravo, in the movie Disney Planes. On a recent vacation trip to Virginia Beach, he couldn't stop watching the Navy Jets flying in and out of the Naval Air Station. It was only fitting that he go as a pilot complete with his own F14 Tomcat!

The fuselage and wings are made of cardboard. The engines are cardboard tubes. The cones are Styrofoam cones. Water bottles were used for the ends of the wings, plant containers for the intakes and exhaust. Wooden dowels support all wings and fins. It is all held together with glue and duct tape. Primed and Painted. Elastic straps were "sewn" into the cardboard. Lighting was added with LEDs that were controlled by a programmable Arduino that even had an afterburner strobe effect when he pressed a button. The finishing touch was a re-purposed old cell phone to play Kenny Loggins' "Danger Zone" and some jet sounds on an endless loop.

Our son loved the attention he got! He got to march in the local parade and nearly everyone pointed or tapped their neighbor on the shoulder to look at how cool his costume was. It was especially nice at night with all of his lights showing up real well in the dark. We got so many compliments on the design. It was quite the hit at the parade. People just couldn't get over how great he looked and the detail of his Jet!

The costume was a little "tail-heavy", so I rigged a loop in the back and I acted as his "wing man" and held it up. This was actually nice as it allowed me to control the movement of the costume to keep the wings from catching on anything and to prevent him from wandering into dangerous situations.