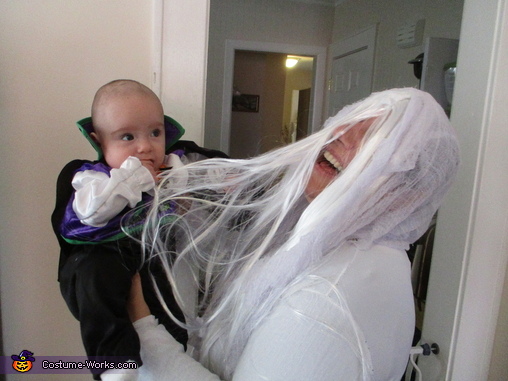 Baby Dracula gets his ghost

A word from Lorraine, the 'Monster Mash' costume creator:

Being we have five month old twins, we were having a hard time getting a complimentary costume that coordinated with our original choices and I felt that if one of the two costumes were missing, everyone else had the same idea, so as a family, I wanted us to have a theme. So, with a penchant for scary movies and that when I ask my babies "is there a Monster in the house" and they respond by making biting motions, I chose the characters from the original Monster Mash song by Bobby Picket.

Here is Matthew as Frankenstein, Andrew as Dracula, my Husband Tom as the skeleton man (who I named Mr. Skellybones) and his dog (same idea) and me as the ghost/Mummy, but in the day I'm white and not so bad but at night, watch out...