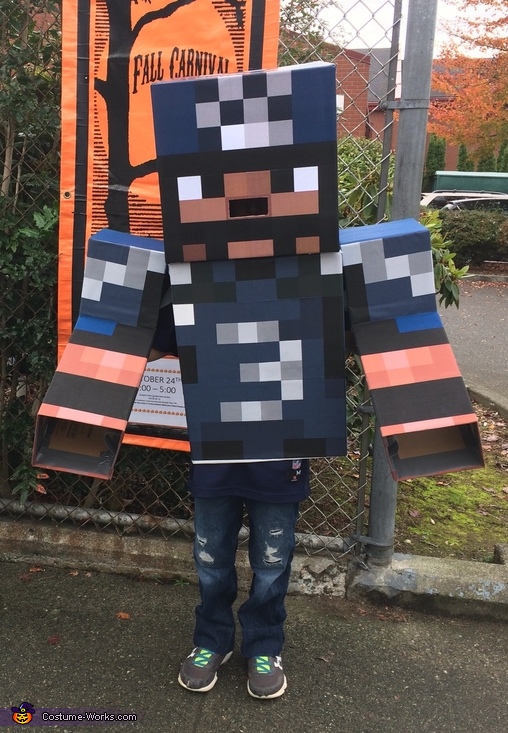 A word from Lourdes, the 'Minecraft Russell Wilson' costume creator:

My 9-year-old son, Kalen, is a huge Minecraft fan, and (since we live in Seattle) we LOVE the Seahawks. This year, Kalen felt like merging his two loves: Minecraft and Russell Wilson.

This costume is completely homemade (from digital design to crafting the boxed body pieces). The materials included: recycled cardboard boxes, a ton of duct tape, spray adhesive, permanent double-sided tape, printer ink, printer paper, Velcro, and elastic. Creating the costume was a joint effort between my son and me; Kalen was responsible for the digital design of the costume, and I was responsible for bringing his digital vision into “real” 3D-life. Kalen spent roughly 3 hours creating the costume’s pixel design on 12”-by-12” documents through an old software program called My Digital Studio. He designed a total of 22 pages that covered the head, torso, and arms of the costume. Once the pages were digitally made, I printed them out poster-style.

Afterwards, we spent about 2 hours cutting apart giant cardboard boxes (for the head, torso, and arms) and securing the pieces with duct tape. The head is a perfect cube: 14” by 14” by 14”. The torso measures 14” by 12” by 18”. The arms each measure 10” by 10” by 18”. It then took roughly 8 hours to meticulously attach the printed pixel papers to the cardboard body parts with spray adhesive, duct tape, and permanent double-sided tape.

There were several things to consider in order to make this costume functional:
(1) My son needed to see, so I cut out a rectangular eye-hole in the spot were Russell Wilson’s nose should be
(2) It was essential that my son be able to move his arms for trick-or-treating, so I made the arms bendable at the “elbow joint;”
(3) We wanted the arms to be secure, yet manageable, so the tops of the arms were held in place to the side of the torso with Velcro. There are also elastic straps inside the cardboard arms that attach at his wrist.
(4) We wanted to prevent the head from being too wobbly, so it was also secured to the top of the torso with Velcro.