No Sammich Barbie and Hungry Ken
by Lindsey

Barbie and Ken
by Courtney

Barbie and Ken
by Jessica 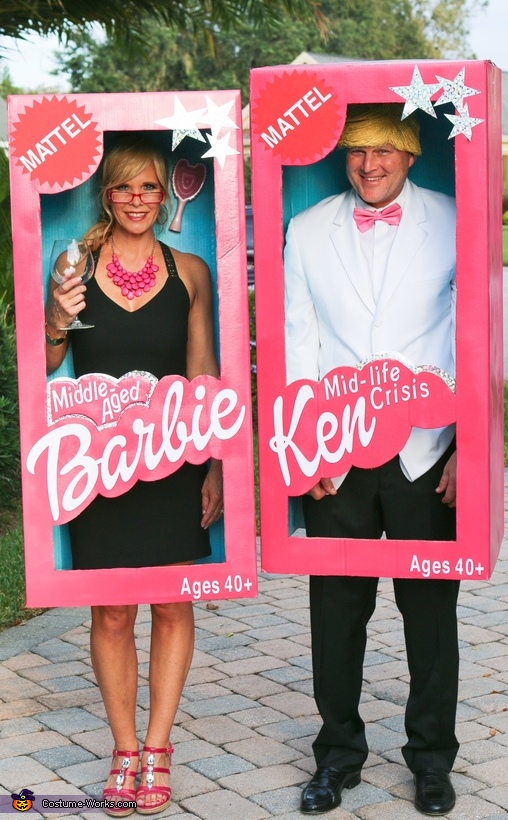 This homemade costume for couples entered our 2015 Halloween Costume Contest, in the Best Couple Costume nomination!

A word from Elisa, the 'Middle-Aged Barbie and Mid-Life Crisis Ken' costume creator:

My husband (Tim) and I are wearing the costumes. We came up with the idea because we have been called "Barbie and Ken" over the years...but thought we would put a funny spin on it :) We purchased U-Haul Space-Saver Wardrobe boxes for $9.95 each, and spray painted them with Krylon Mambo Pink spray paint (purchased at Hobby Lobby 30% off for about $5 a can...it took a couple of cans per box). I hand-drew the cut out area of the box and cut with a box cutter. After cutting them, I sprayed the inside of the boxes with Krylon Island Splash spray paint (Hobby Lobby, around $5...took one can per box). I used my Silhouette Cameo machine to make the cut-out Barbie and Ken writing, using "Dollie" font for the script and "Barbie" font for the rest. We attached the boxes to ourselves using a belt around our waist which went through holes around the back of the box (see picture). Ken's wig was a Classic Brown wig spray painted with bright yellow paint. The brush I hot-glued inside was a Tangle Angel detangling brush purchased from Amazon for $10. Inside Ken's box was a prescription empty bottle labeled with the Viagra logo, and on the other side was a picture of a red Corvette. The clothing is just pieces we put together on our own. I would say that each box cost around $40-$45 to make. It was a ton of fun and everyone loved it!!!