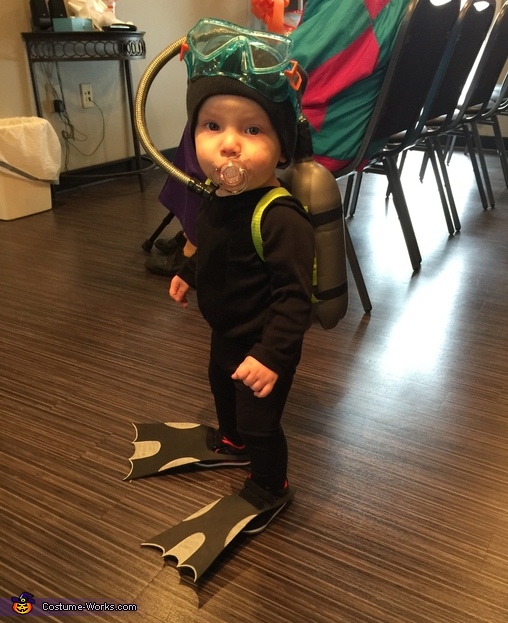 A word from Jessica, the 'Littlest Scuba Diver' costume creator:

This was my son Skylers first Halloween so I wanted to make his costume, I found this on Pinterest. We actually only have $12 invested in the costume cause we already had most of it! We took a solid black onsie(we already had), black baby leggings(normally 8.99 at Childrens place we got them at 50% off), and a black beanie for his "wetsuit". We had swim goggles but you can catch them at a good price on clearance at this time of year. We took a 2-liter bottle sprayed painted it, my husband used Steel It spray paint but any will do, we already had it so no money spent there. Attached a sink hose(5.99 at Walmart) to the top using duct tape attached his pacifier to the other end of the hose using electrical tape and a bread tie to make a regulator. Took the straps from a bumbo seat we was no longer using adjusted them to fit him just right and attached them to the 2-liter
using electrical tape. Tank should now be complete. We went to hobby lobby and got two sheets of Wacky Foam (99¢ a piece) measured them to his shoes, my husband them drew flippers on the foam using a metallic marker and cut out the flippers he cut out "ankle" holes so we could slip his feet into them and pull them down around the tops of the shoes so they would stay in place! Simple and cute!