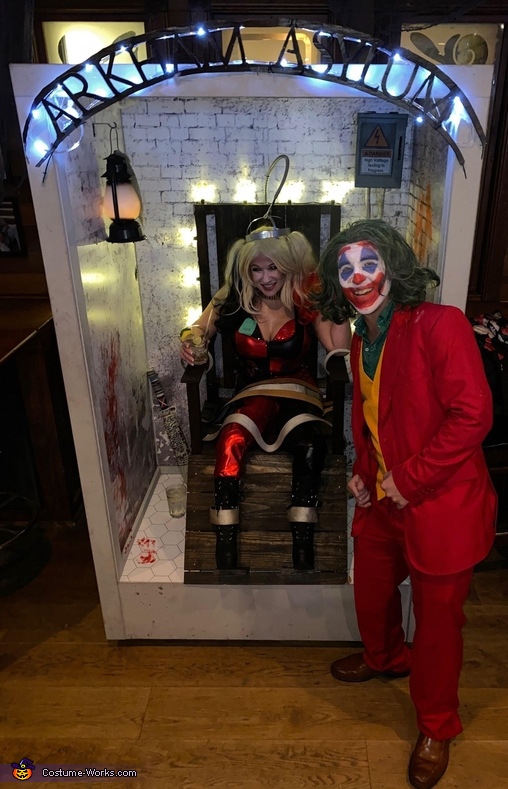 A word from Matthew, the 'Joker and Harley's Electric Chair' costume creator:

We built the entire project from scratch and even built the electric chair from wood pallets. We cut a hole in the chair so that Jenna can stand up through it and we made fake legs from all kinds of scrap materials. We stuffed those materials into the pants from a Harley Quinn outfit that matched the outfit Jenna was wearing. We then placed the legs on the chair, strapped the feet in, and put a belt across the waist. This created the illusion that she was actually sitting in the chair.

We used textured paint on the outside of the scene to make it look and feel more like cement walls of an asylum. We used wall paper on the inside and used spray paint to add our own little touches to the interior. We bought an electric box that makes sound, lights up, and moves as if it is electrifying. I attached a lever to the outside wall and ran the demo button of the electric box through the wall, around the back, next to the lever, so that when I pull the lever it creates the illusion that it is turning the power on and shocking Harley. Jenna made the Arkham Asylum sign out of cardboard, wire, and light strips. Last thing we did was add wheels so that it would be easy to transport because it is pretty heavy. The project took about two weeks to complete.