Jack in the Box
by Nichole

Jack in the Box
by Rachel

Jack in the Box
by Shelia

Jack in a Box Costume 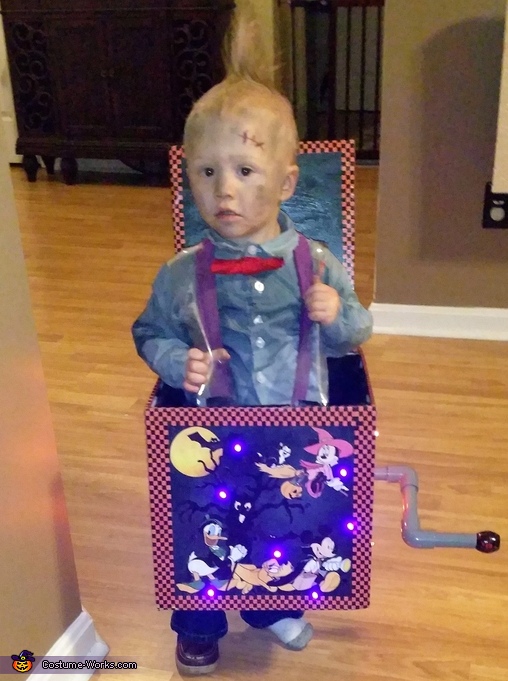 Jack in a Box Costume

A word from Melissa, the 'Jack in a Box' costume creator:

My son who is 1.5 was a jack in the box this year for Halloween. I got the idea for this costume last year as we were playing with a few Halloween themed jack in the boxes I have in my home. I have to say I had a vision of what it would look like and the end result was better than I expected. To keep the costume light yet durable I used a foam cardboard to construct the box and lid. I had to make sure it would be easy to walk in, not too big or to small so after doing a measurement our box was 12 by 12. I added hinges and glued them in place so the lid stayed open. I wanted the box to have a cloudy tone so I spray painted it very lightly using slate colored paint. I then added a decorative paper around the edges to give it a fun trim and added various scenes copied from my computer that told people a little bit about my son. one side was was a dog scene, a monkey scene, a train scene, bears and the front is my sons favorite characters mickey mouse and his friends. The box was all Halloween but I made sure it fit his personality. I wanted a wow factor so we added purple and orange lights on each of the sides and of course every jack in the box needs a handle which I constructed using pvc pipe painted gray. in order to get the box to attach to my son, we added clear plastic straps and secured them into place using safety pins. For his clothing I wanted him to look like a creepy, but kinda cute, little boy doll. I picked up a inexpensive white dress up shirt and dyed it black and added gray tones to it then I frayed all the edges and added reps and cuts to make it look old and dingy. I originally was going to use a hat, but I played around with what little hair he had and I created a kinda Mohawk look and added a tiny bit of purple hair gel. it really finished the look. I accessorized with a bow tie I made, suspenders, jeans and shoes and of course we added makeup to make his face look dirty and we gave him some stitches. the response to this costume was insane. we went to several events so he could wear it and I had people taking pictures and commenting on its originality and creativity. I had no help with this. I figured out every detail on my own and I have to say I am thrilled with the outcome. I still cant believe the reactions people had! In case your wondering how my little man liked it, he loved it! He had no problem moving in it and was adorable running around in it!