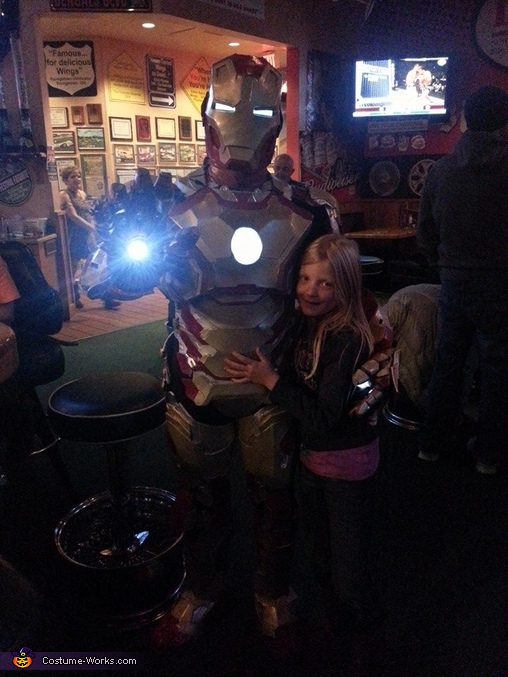 My daughter that looks at me like a real super hero now!

A word from Travis, the 'Iron Man' costume creator:

I've been a big fan of Iron Man since I was a kid and with the new movie coming out I decided to make an Iron Man suit, however it took me much longer than I planned for and just finished it after a little over a year of work. (so much for making the movie premier lol)

The costume is made from foam (anti fatigue mats you buy at walmart in the exercise section) You have to render the parts in 3D using a 3D rendering program, then I scaled the parts to my body size. From there you print out each part, cut them out as templates, trace them on to the foam. Next cut out the foam pieces and spray with plasti-dip to give it a more rigid surface. Next assemble with hot glue and prime for painting.

For painting I used automotive paint from Krylon dark cherry metallic and sunburst gold masking off in sections and painting. Finally I used EL-Tape or EL-wire for the electronics. It is basically a flexible wire that can be cut and shaped and lights up like an LED when you run a current through it.

Also a note during assembly I used chicago screws for the joint articulation, these are screws with smooth posts that allow the foam parts to pivot on it like a hinge.