Scarecrow of "The Wizard of Oz"
by Misty

My son wanted to be Yoshi this Halloween, so we made his costume by adapting a penguin pattern. 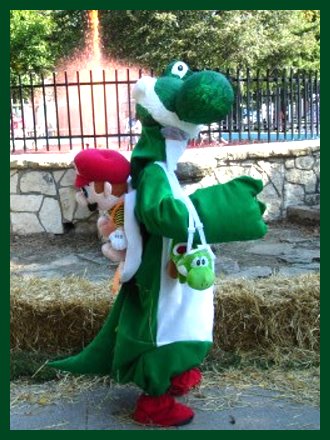 The body is made of felt. We stuffed it with plastic bags. Yoshi's head is made of a plaster paris type stuff, called Rigid Wrap. We covered balloons to get the basic shape of Yoshi's head. This is sitting on top of a bike helmet. To allow him to see, we put a sheer peice of fabric at the top of Yoshi's neck. The rest of the neck is felt to match the body.
Yoshi has a felt shell on back and a stuffed Mario is riding along. A Yoshi backpack makes a great treat bag.

View other Homemade Costumes for Boys:

If you don't have the time or the inclination to MAKE a costume this year. If you've thought about it, but your heart, for whatever reason, JUST isn't in it... You can probably purchase a costume of the type you were planning to make...and maybe even for about the same as you might spend on the materials to MAKE a costume. On the other hand, you may look around and spot a Costume that changes your Costume plans completely Ü.