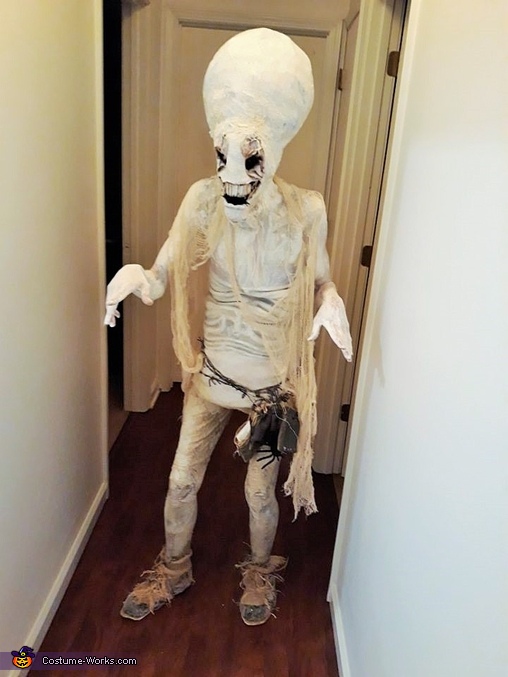 Alien coming at you

A word from Chrisie, the 'Hauntingly Memorable Alien' costume creator:

Four years ago I created my first cosplay costume. I fell in love with the process. It's the perfect outlet for my own creativity. For this year’s Halloween costume, I scrolled through the internet for sources of unusual inspiration. I found an online deviant art platform full of works from creative minds to explore. Specifically, I was intrigued by the drawings and collections by an artist from Russia. His characters are creepy and unexpected. By combining the characteristics of the creatures I imagined that I could create the most hauntingly memorable alien.

One of the best things about creating costumes is the ability to create with unrestricted standards, compliance or techniques. This costume was created using a variety of unconventional ideas and materials.

It all started by tracing the outline of my body. I taped a large piece of paper to the wall and then traced from the top of my neck to approximately 1/3 of the way down my leg. I then taped the outline to the bottom of my glass coffee table, faced upwards. The top of the table then became the area where I would build the body of the costume. I sponged several layers of liquid latex and torn tissue paper on top of the glass, over the outline. Once I had applied 20-30 layers, I cut strips of foam window insulation in half and then pressed them into the tacky latex body to create my ribs. Next, several more layers of liquid latex and tissue were applied over the ribs. To create the illusion of veins and arteries in the neck, I laid out long lines of caulk on aluminum foiled cake boards and allowed then to dry and then used the same technique as described with the ribs to incorporate into the latex suit I was creating. Once I was satisfied with the thickness of the suit, I removed it from the glass table. It is important to place talcum powder under the latex edges as you lift the suit off the glass. Latex sticks to itself and is nearly impossible to get apart. I repeated this same process over the glass coffee tale utilizing the same outline of my body to create the back of the alien. For the vertebra, I dropped cotton balls into liquid latex and allowed them to dry. I incorporated them again, utilizing the liquid latex and tissue layering process. At the top of both pieces, I also applied strands of yarn into the latex to that they could be used as shoulder straps to tie and secure the top of the suit on my body

Once the front and the back were removed from the glass I attached the two pieces along their sides. I used the same latex layering method to adhere them together. It was helpful to utilize sewing pins to hold the pieces together. Just remember to remove them after you have reached a level of adhesion. I then used one of my own undergarments to trace the outline of each leg opening so that I could cut to remove the excess material and create the bottom of the body suit. I sewed elastic in the openings of the legs using my sewing machine and a zig-zag stitch through the latex. I cut a flap open in the bottom of the suit which could be secures with double stick Velcro so that I could use the bathroom if necessary. As an added measure of dedication and security, however, I also wore two pairs of Depends undergarments. The first layer was for any unfortunate accidents that could have occurred, but didn’t. The second layer was purposed to pack with polyester filling around the belly and buttock area of the alien to create his physique. Finally the suit was painted primarily white but also shaded to create definition with water based airbrush paints. I used a collection by Tim Gores which included a shade of blue, a decayed brown, bone white and bloodline crimson.

My legs were created by using grey tissue paper found in the packing materials within the boxes of new shoes. The grey paper they stuff down into the toes was the perfect color and texture that I needed to create the effect and also it matched the texture of the body suit. I first removed the hair from my legs entirely and then applied body safe liquid latex to each leg and then layered the tissue paper with another heavy layer of liquid latex. Once dried, I enhanced the wrinkle appearance of the skin like texture that I had created using the same colors from the suit.
My shoes were created by first making a waterproof sole. I cut out the pattern using an insoles of one of my sneakers as a pattern and TPO roofing membrane for the base. I then used spray adhesive to adhere burlap material over the top of the TPO material to create a non-slip surface. I cut a slit in the toe area on the sole and ran two foot strands of raffia through the slit to create a flip flop. I bought a pair of faux fur rabbit slippers and after sliding my foot into them I used the spray foam to adhere the bottom of the slipper to the burlap surfaced sole I had created. I cut an additional one foot square piece of burlap and tucked it around the top of the slipper to hide the slipper. I then wrapped the raffia up and over the top of my foot crossing the strands up and over the top of my foot and then continuing to wrap them around the back of my heel and around my ankles where I double knotted them to secure. I went outside and took leaves from the lawn and stuffed them into the strands openings on the raffia. I wrapped the whole ensemble with additional twine.

My arms and hands were painted with body paints to match the colors used in the making of the body of the costume.

The head was created by first taking a balloon and blowing it up to the desired size. I then wrapped the balloon with twine that I had ran through Elmers Xtreme School Glue and allowed it to dry. Once the twine was dry and stiff to the touch, I popped the balloon and what remained was a large cage like structure which would serve as the lightweight skeleton of the alien head. I wrapped the structure with a cotton fabric layer. Meanwhile, I had also blown up another balloon, slightly larger than the one used for the structure and had been applying layers and layers of liquid latex (no tissue paper) with a sponge over the surface. I performed this task for many nights. What I created was a latex skull cap that would the proper size to fit over the twine structure. I made an additional skull cap using the same method that was the size of my own, actual head. I reinforced the opening of the large head structure by wrapping the twine around the opening with a light weight wire.

The mask was created by applying clay over an artist’s face template. This was the technique I used to build the face out in the cheekbone and eye areas. I used wire to create the frame for the bottom jaw of the alien and then wrapped the wire structure with masking tape. I then positioned a piece of burlap over the eyes and nose area on the mask and poured wood glue over the burlap to mold it into the shape over the clay and mask. Once dry the entire piece was removed from the artists’ mask and then covered with layers of latex and tissue paper to match the texture of the rest of the suit. I created his lips by running wire through some of the earlier mentioned strands of caulk that I had laid out and dried and then I attached then to the mouth area. The jagged teeth were created by cutting up wooded paint stir sticks and then I painted them with antiqued looking paints. The burlap eye sockets were cut out to open for viewing needs and then embellished around the edges of the openings with additional pieces of scrap faux skin that had been removed earlier from the bottom of the suit. I used latex to adhere the pieces within the eye sockets and then antiqued the materials using paint. I cut a slit in the top of the mask and one on each side, near the cheekbone area. I then attached elastic by running through the slits and stitching the ends together with thread and needle. I attached one piece of elastic running from side to side through the cheekbone openings and then another piece coming from the slit in the top of the mask down to attach it to the center of the other. I had created a way to secure it onto my face. I just slid the elastic over my head. I created an actual mask.

To assemble the entire costume I first put on the body suit over my already prepared legs and then tied it over the shoulders with the yard strands that had been incorporated into the suit during its construction. I secured the flap on the bottom with the Velcro. I placed the first skull cap onto my skull and secured the edges to my own face and around to the back of my head with liquid latex. I painted my entire face and my teeth black so that no one would see me through the openings of the mask. I wore black contact lenses for an additional spooky effect. I then placed the large head over the first skull cap and secured the edges again using liquid latex and this time also applied layers of tissue to incorporate the edges of the head into the mask. On the back of the head, I had adhered sacrificial sheets of scrap faux latex skin materials that draped down my back. I used these to attach the back of the body suit. The front of the suit was adhered to the neck of the mask. All of the seam areas were hidden with additional layers of liquid latex and tissue paper.

Additional props included faux barbed wire that I wrapped around my waist which I secured little burlap bags that I painted to appear rustic to. These bags contained my diabetic supplies and id, credit card, makeup, etc. I also attached two plastic tarantellas and faux rabbit tails to the barbed wire. I wore what was commercial referred to as freaky fabric as a shawl.

The costume was a huge hit in the public. We live near Atlanta, GA. I bet over 200 people wanted their photo taken with me that night. Everyone wanted to tell me how spectacular they thought it was. Some people were genuinely afraid of the alien. The most incredible honor however, despite the success of winning any contest, came from the recognition that I received by the Russian artist who had inspired me to begin with. I had sent him photos on social media and he was so impressed that he even re-posted them on his social media, face book page in Russia! I am so proud. Thank you for allowing me this platform to show you this year’s costume. I am sure that you will agree that he is unique. It was an absolute joy to create him. I hope that you will also enjoy the fruits of my creativity.