Gizmo transforms into Gremlin
by Sean 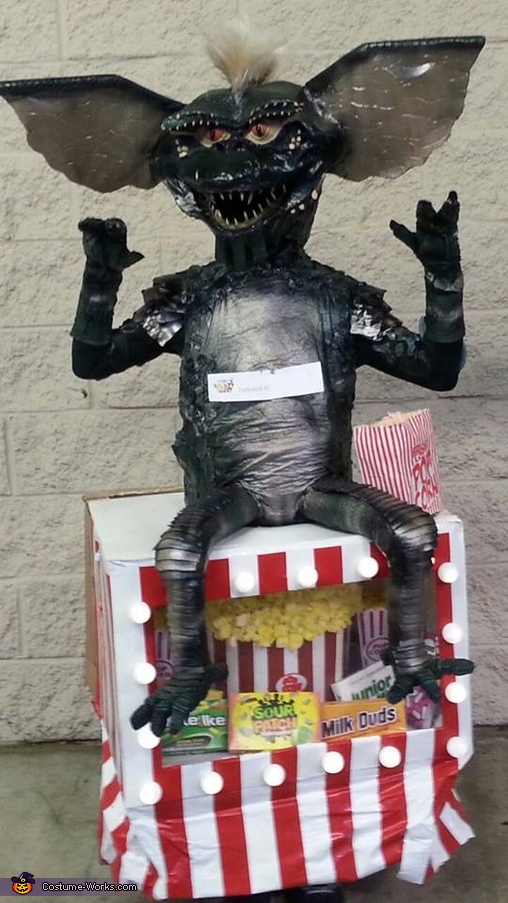 A word from Amy, the 'Gremlins' costume creator:

My daughter and I get together every March or so to decide what we all are going to be for Halloween. This year it was between Katniss and a gremlin. After a while of floating around some ideas we decided we could do a better gremlin then a Katniss. So we gather all of our supplies and head to what we call the "costume porch" at my sister in laws house.

For the next few months we spend all of our free time there. We started with our supplies, we knew we needed allot of stuff but, we are not made of money so we visited a lot of thrift stores and yard sales. This is what we ended up with: boxes, camping foam, thin flooring foam, loose cardboard pieces, book lights, dowel rods, L brackets, old thin jacket that’s too little for her, lots of glue sticks, glue, newspaper, hot knife, spray paint, craft paint, fishnet pantyhose, dollar tree popcorn containers, packing peanuts, red duct tape, white duct tape, elbow length gloves, old empty 2 liter bottle, fishing line, piece of clear plastic, movie theater candy boxes, poster board ,string of battery operated lights, Velcro, popsicle sticks.

We started with the head. I measured her head and cut strips of camping foam to make a cage like foundation that would fit on her head and leave a gap big enough to let her see out of the mouth. After I was sure it would fit. I then started building onto that with more foam until I had the right basic shape of the head then paper mached the whole thing. while that was drying I used dowel rods to make something like a frame for the ears glued that together with hot glue then laid it out on the thin flooring foam (like what goes under hardwood flooring) and sandwiched it between two pieces and glued it together leaving a long piece of dowel I could poke into the head to attach. after cutting off all the excess foam I turned the hot knife down on low and made some designs in the foam with it to make it look like the lines and wrinkles in a picture of gremlin ears. then we moved on to teeth I got a piece of the camping foam and cut a strip thick enough to look like gums and to poke small sharpened dowels painted to look like teeth into it. When the head was dry enough we assemble the whole thing. To make the surface of the whole thing like more gremlin like I mixed a lot of Elmer’s school glue with a little paint and painted over some cut up fishnet pantyhose I had hot glued in places all over head. We added a few Popsicle sticks for the little spike things on his face. For eyes I cut out holes to accommodate some fake eye balls we found at dollar tree leaving holes in the back of them to put book lights with on/off switches to make the eyes light up. Finally the head was done.

We got a cardboard box big enough to accommodate my daughter and still have enough room for popcorn and candy boxes. We started with cutting a circle in the top and bottom of the box so she could stand in it and pull it up to just below her waist. Then we cut the front of the box out to make the window leaving a border to attach some ping pong balls and lights later. Then lined the whole thing with white poster board (we cut another piece the same size as the bottom with the same hole in it both to reinforce and so we it would be easier to attach everything on and then hot glue the whole thing inside the box). for the popcorn container we painted red and white stripes on another piece of poster board rolled it up, stood it up and attached it around the inside of the hole to hide her legs. Then we got an old scrap piece of sheet and glued it around the inside top rim. We then done my daughters favorite part of making the costume. We bought the movie theater boxes of candy. After we emptied them she ate candy while I glued all the empty boxes onto the card board. Then we put the packing peanuts we got from a yard sale in a box and sprayed them with yellow spray paint. after it dried my daughter hot glued pieces all over the whit piece of white scrap fabric to fill the popcorn bucket that was hiding her legs and then glued some on a piece of cardboard to put in the small popcorn buckets we had got from the dollar tree. We glued the completed display case inside the box including gluing the scrap piece of fabric through the top hole and onto the top of the box. Then we covered the sides of the outside of the box with strips of red and white duct tape and the top with white poster board. We poked holes around the "window" and attached a string of lights from the inside out and cut holes in ping pong balls to go over each light and hot glued them in place. We then finished it off with a piece of clear plastic over the window.

It was now time for the legs and gloves. The legs we made from camping foam rolled up and tied each joint with fishing line, painted them with our glue paint mixture over fishnets added some extra thickness for knees and they were done. For the gloves we cut and sewed fingers together until we had a set of three fingered gloves, added a little extra length and some long claws cut from an empty 2 liter bottle. We then rolled a piece of the thick camping foam the same size as the hole in the box and attached the legs to that.

As far as the torso we covered the top of on old thin black jacket with circles of foam we had covered with fishnets and painted with the glue/paint mixture to make them look like scales. On the front of the jacket we attached another scrap piece of fabric covered in the foam scales to cover the zipper so that when she zipped up the jacket the scrap fabric and foam would attach with Velcro on the side. We then hot glued the bottom back and sides to the insides of the round piece of foam with the legs attached. After that we gathered all the gremlin pieces together and started painting.

We came to the conclusion that spray painting the entire gremlin black then adding a light mist of green worked best. After the black and green was dry we added some gold stripes and belly. Then we needed to attach the whole costume together. We got some L brackets and attached them from the bottom of the gremlin to the top of the box and hoped for the best. Thankfully it worked. We spent a few days after that just painting the small details and attaching a mohawk to the top that we made out of last years beetlejuice costume. After it was all done she decided it needed gizmo somewhere on it. Since I couldn’t find a stuffed gizmo I made her one out of two other stuffed animals .and we made a thin cardboard box to attach to the back that looked like gizmos box from the movie. We put him in there where he could peek out and her and her dad rigged gizmo up where he would shake when she flipped a switch. It was very cute. But the best part was gizmos box would also hold her gloves and extra popcorn when she got tired of wearing them she called it her "trunk".

She was very happy with it and she loved the attention she got from everyone. She especially loved the fact that her lights on the front light up so she could see where she and her cousins were going in the dark. The only part she didn’t love was stopping every 5 feet so people could take pictures with her and the fact that everyone thought she was a boy but she never complained. I was as proud of her as she was the costume.