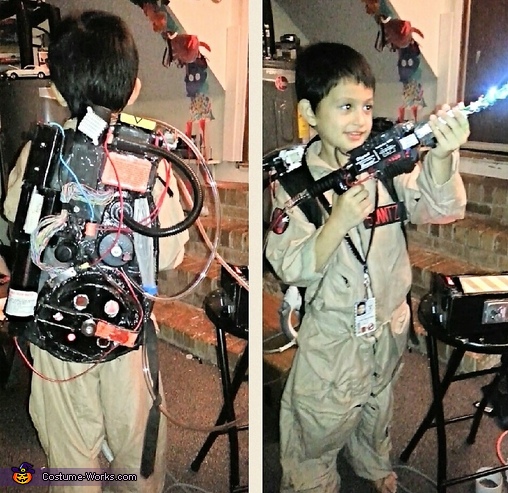 Front & Back of the costume, with Neutrino Wand & Trap to the right.

A word from Stephanie, the 'Ghostbuster' costume creator:

My son Chance, is wearing this costume. he has loved Ghostbusters the original film as well as "the real ghostbusters" cartoon since he was around 3 years old, he wanted to be a Ghostbuster for Halloween, but they didn't sell the costumes at least the quality we wanted for him, or the accessories. The costumes were flimsy and didn't look real, the proton packs were inflatable or way out of our price range and no one had a neutrino wand. He begged and I wanted him to have a happy memorable Halloween, so I took the $30 I had available and got everything at the Dollar Store, I looked for shapes from the original proton pack and painted them black, mounted them on a foam cardboard piece and glued that to an old backpack, His dad is an IT guy, so I used some spare pc parts to bring it to life using the rainbow ribbon, wires & some old knobs from obsolete items. I used the pommel from a foam dollar store sword to be the base of the neutrino wand, light up laces down the end and string lights from the dollar store that flashed, and more lights that went into the pack itself. I used a tin takeout bowl for the "engine" of the pack, and put clear lenses under that I colored red so the lights could show red, one under each section so the lights could blink independently like in the movie. I bought the patch & nametag and flight suit online, but the flight suit is the same exact type they used in the movies, but they only had it in a large, so I scaled it to fit, leaving hemming able to be removed so he can fit it into adulthood. I had a toy Slimer I pinned to his shoulder to finish it off, and made a Trap for him to carry alongside his pack. Later on I found a gift card for a GB movie that had the logo on it, so on the reverse I printed his credentials as "Raymond Stantz" using his school photo to give him an official I.D. on a lanyard too. Overall, it cost about $65 total & about 36 hours, which I think is pretty great since I have never seen this kiddo so proud and happy to dress up, it makes all the work worth every second.