Garbage Man with Truck
by Stacy 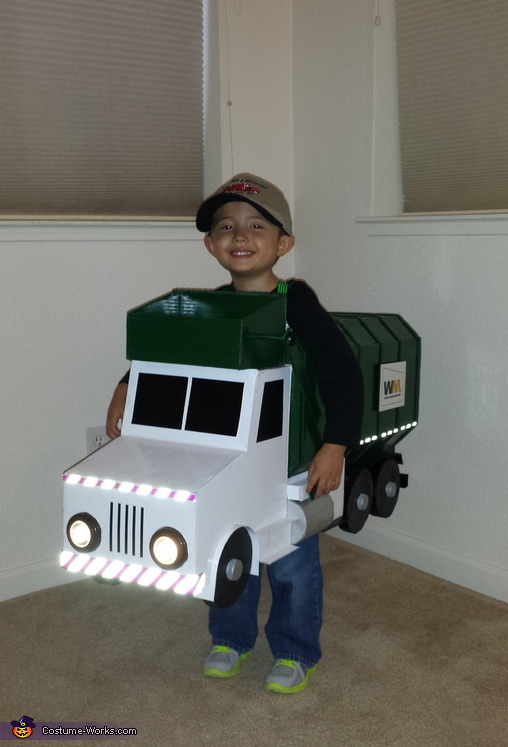 A word from Ryan, the 'Garbage Truck' costume creator:

My youngest son really wanted to be a garbage truck this year for Halloween. I built this costume in two weeks but spent many long nights on it just so it would be done before Halloween.

The overall truck measures are 38 inches in length, 14 inches in width, and 21 inches in height. It is mainly made out of cardboard from various different boxes and cereal boxes. I started on the main part of the truck which my son would be positioned within which was a box that had its top and bottom cut out and had straps added to it before I went on to building the back garbage bin and the front cab. This box was 9.5 inches in length, 9.5 inches in width, and 9.5 inches in height. I had my son test fit this several times with the straps installed before I went onto building the rest of the truck. The green straps were actually cheap tie downs that had their hooks cut off from both ends and had carriage bolts installed with large washers and a nut. Once that had been done I went onto building the garbage bin portion which was made by cutting the pieces of cardboard and hot gluing them into place to give the overall shape of the garbage bin. After the general shape of the garbage bin was done I then cut strips of cardboard out and made them into ribs to be wrapped around the garbage bin. The overall garbage bin was 26 inches in length, 13 inches in height, and 12 inches in width. I then proceeded onto making the front cab of the truck which was made out of cardboard and had windows cut from cereal boxes. The cab dimensions are 12 inches in length, 10 inches in width, and 13 inches in height. I then went onto making the lower frame which would hold the wheels and axles. The frame is of course made out of cardboard. Wooden dowels were used as axles for the wheels which are also made out of cardboard. Gatorade bottle plastic caps were used for the hubcaps. Tap lights were used as the vehicles headlights and were hot glued into place. I purchased caution reflective tape and cut them into strips for the front and rear bumpers along with the sides and back of the garbage bin carrier. Once the overall truck had been built I painted the main garbage bin hunter green, the lower back half of the truck was painted gloss black, and the front cab was painted gloss white. I added signs to the sides of the bin by copying an image and resizing it in paint and just printed it out and glued it into place. The fuel tanks were made by using a cup and outlining it onto cardboard which was then cut in half and wrapped with cardboard into place by hot glue. The small garbage bin on top of the cab was used to hold candy and when it got to full or heavy I just took some out and place it into bag that I was carrying. The garbage bin arms were just strips of cardboard that I glue into place along with wooden craft pieces for more details. The garbage bin arms are not functional and were installed just for looks. The side steps of the cab were made out cereal box strips and bent into shape and hot glued into place on the front cab and lower frame. The wheel well fenders were also cut out of cereal boxes and glued place.

The majority of the construction was pretty much straight forward and I used a Razor blade along with a metal straight edge to cut the cardboard into desired shapes and length. I used scissors for cutting the cereal box pieces since that cardboard is easier to cut. A lot of hot glue was used to hold it all together. I used push pins to hold pieces them together and once those pieces were glued I just removed the push pins. This helped out a lot.

I wish anybody putting one of these together to take your time and just enjoy the overall build. Once it was all done and said I was very pleased with the results and my youngest definitely loved it.